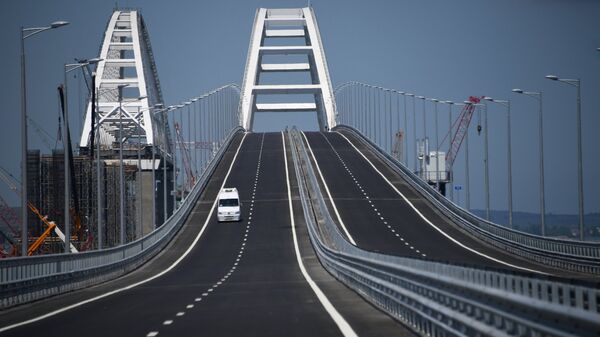 © Sputnik / Grigori Sisoyev
/
Go to the mediabank
Subscribe
International
India
Africa
WASHINGTON (Sputnik) - The United States remarks about Russia’s Kerch Strait Bridge in Crimea are predictable and Moscow is not asking anyone’s authorization for building infrastructure projects on its territory, the Russian Embassy said in a statement.

The US State Department earlier said the bridge impedes ship navigation and goods delivery in the area and therefore the United States is watching the situation regarding it closely.

"As one could predict, Washington is not happy with that. But Crimea is Russia," the embassy said in the statement on Tuesday. "We shall not ask for anybody’s permission to build transport infrastructure for the sake of the population of Russian regions."

Earlier in the day, Russian President Vladimir Putin opened the road section of the Crimean Bridge, which connects the Russian southwestern peninsula with the Krasnodar territory.

Since 2014, relations between Moscow and Washington have deteriorated because of the crisis in Ukraine and Crimea's reunification with Russia via a referendum. The United States and its allies do not recognize the results of the referendum, but Russia maintains that plebiscite was carried out in full accordance with international law.

Russia
Crimea: Longest Bridge in Europe Set to Be Unveiled (VIDEO)
With 19 kilometers (11.8 miles) in length, the Crimean Bridge is the longest one in Russia. The bridge’s opening was initially planned for December 2018, but construction works were finished ahead of schedule. The bridge has opened car traffic from the city of Kerch, a Sputnik correspondent reported Wednesday.

The car traffic has also started from the Taman peninsula in southern Russia in Europe.