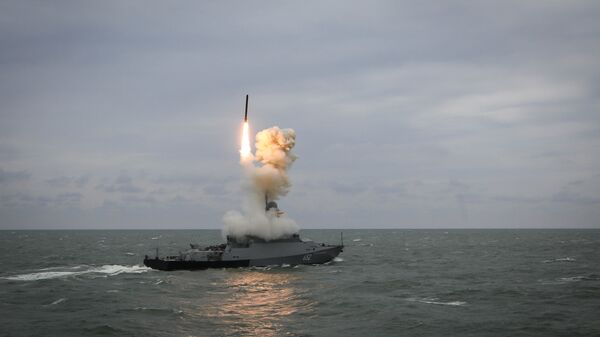 According to Russian President Vladimir Putin, the country's military vessels will be on permanent standby in the Mediterranean Sea due to a terrorist threat in Syria.

"Due to the remaining threat of incursions by international terrorists in Syria, our ships carrying Kalibr cruise missiles will be constantly deployed in the Mediterranean Sea," Putin said at a military meeting.

Speaking further, the Russian president said that the practice of distant sea campaigns and drills should continue.

"Some 102 sea campaigns by Russia's ships and submarines are to take place," Putin added.

At the same time, Vladimir Putin noted that Russia would continue reinforcing the maritime part of its nuclear forces to increase the role of the Russian Navy in the country's nuclear deterrence.

"It is necessary to bolster the marine component of the strategic nuclear forces. It will enhance the Navy’s capacity in nuclear deterrence. Developing multifunctional vessel groups, which should effectively fend off military threats on the sea, remains an important task. I also require special attention to be paid to coordination of such groups with the Aerospace Forces and other troops," Putin said.

"As before, the quality and timing requirements for the state defense orders should be kept most stringent. There are, of course, problematic issues related to manufacturing new equipment and to repairing surface ships and submarines. We’ll listen to concrete solutions on these issues," Putin said.