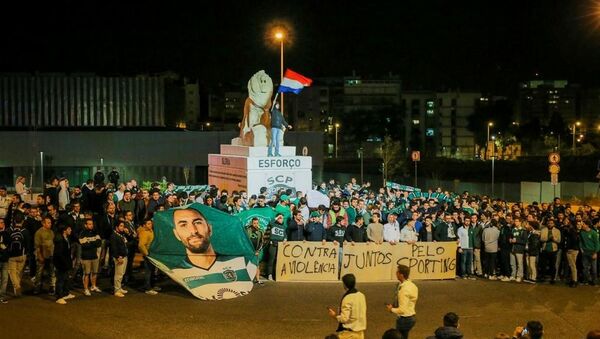 © Photo : Jan Hagen / twitter
Subscribe
Sporting Lisbon’s players and management were hospitalized after about 50 masked intruders attacked the club’s training after the team failed to secure a place in the Champions League.

FC Sporting Lisbon has condemned the brutal assault at their players and staff after dozens of people with covered faces attacked a training center in the Portuguese capital’s suburb, where the team was practicing ahead of the Portuguese Cup final against Alves.

"Sporting is not this, Sporting can not be this. We will take every effort to establish full responsibility for what has happened and we will not fail to demand the punishment of those who acted in this absolutely pitiful way," a statement on the club’s website reads.

The Portuguese league also expressed revolt, stating, “The violent acts [that] the players and coaching staff of Sporting were subject to today. The perpetrators of these incidents are not fans of football. They are criminals.”

READ MORE: Sporting Wars: What Are The Most Violent Football Derbies in the World?

According to the local media, cited by Sport.es, around 50 hooded intruders carrying torches attacked the players, with belts and iron elements at the Sporting Academia training base.

This season’s best player, Dutch forward Bas Dost, who 13 goals in 12 matches for the club, was reportedly hit in head during the attack.

Just heard about the attack by the so called Sporting Lisbon fans wounded their own players including Dutch striker Bas Dost. #basdost pic.twitter.com/UpqHNuDPSi

​Following the attack, fans gathered to support their team and protest the brutality against the players and management.

More than 500 Sporting fans gathered outside Alvalade last night to display their disgust with the hooligan attack and show their support to the players, technical staff and the club.

This is proper fans. pic.twitter.com/scBWMTEAgH

This madness needs to stop at my club. I'm tried of all the drama this season. It's absolutely ridiculous. This isn't Sporting. Those fans are scum. How the hell do you attack BAS DOST!?!?!? He's our offense so stupid man so stupid. I can't with these idiots

What's @UEFA doing about yesterday's organised violent attack at @scp? Including the way the president is dealing with the team? #scp #Sporting #football #uefa

Hope the Sporting Lisbon players are ok after the attack

​According the Argentinian portal TYC Sports, footballers Marcos Acuña and Rodrigo Battaglia, who were targeted, will terminate their contracts and leave the club.

The attack happened shortly after the club couldn’t get to the Champions League after losing to its rival Benfica in the Portuguese Championship.