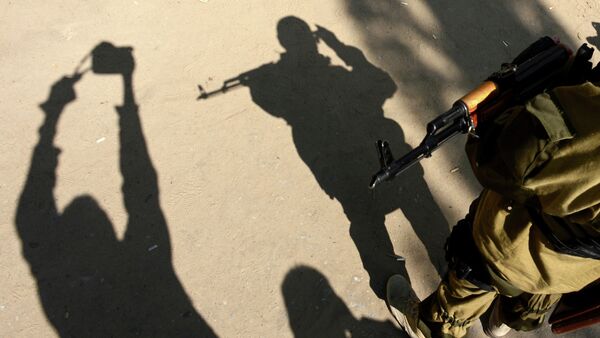 Russia’s Foreign Ministry quickly condemned the raids on RIA Novosti’s facilities in Ukraine, and the detention of Mr. Vyshinsky, with Russian Deputy Foreign Minister Grigory Karasin telling reporters today that Moscow has sent “two notes of protest” to Kiev over the matter.

“He was detained as a Ukrainian citizen. The [Russian] embassy is in contact with the relevant Ukrainian authorities. We know that the detained journalist was transferred to Kherson, and our consul in Odessa has the relevant mandate. We will work to clarify the situation and keep you posted," the deputy Russian FM told reporters today.
US Defends Kiev's Actions

SBU Conducts Searches in RIA Novosti Ukraine Offices, Detains Journalists
When asked a question about Kiev's actions, during a press briefing on Tuesday, US State Department Spokesperson Heather Nauert said it should be done "in accordance with the law" but supported Kiev in defending itself against “Russian propaganda.”

“The arrests of journalists or searches taken of media outlets, if that is done, it has to be done in accordance with the law. It is something that includes international human rights law. We take those actions seriously. We hope that the government takes those actions very seriously. We understand that Ukraine, like a lot of other countries, has been concerned about intense propaganda,” the spokeswoman said on May 15.

“Goodness, when we talk with a lot of our allies and partners overseas, they certainly have fallen victim and understand the influence and the reach of Russian propaganda. So we do understand Ukraine’s concerns about that.”

Although the SBU’s operation and subsequent detention of journalist Kirill Vyshinsky have received some coverage in global news, the mainstream media in the west has opted to completely ignore the development, which is an alarming act of aggression and censorship against a news agency.

As confirmed by searches of their websites for "Vyshinsky", BBC News, the Independent, CNN, Fox News, and Euro News made no mention of the raids or the journalist's detention in any of the articles, over 24 hours after the incident.

The arrest of three Al Jazeera journalists in late December 2013 and their subsequent detention by Egypt sparked global media uproar. In the case of RIA Novosti, the mainstream media has not only not defended the journalists’ right to report and disseminate information or criticized their mistreatment, but have failed to cover the story and bring it to their readers’ attention.

Although the MSM is silent, many have taken to social media platforms, using #TruthNotTreason to express their support for the journalists and pressure the Ukrainian authorities into releasing Mr. Vyshinsky.

Anthony Bellanger, the deputy general secretary of the International Federation of Journalists (IFJ), called on Kiev to "immediately release" the detained RIA Novosti journalist, in an interview with Sputnik France.

"Freedom of the press is guaranteed by Article of 34 of the Ukrainian Constitution, and Article 10 of the European Convention for the Protection of Human Rights and Fundamental Freedoms. It is inadmissible, in a democratic country, to imprison journalists who are fulfilling their professional duty to inform the public," he added.

HRW Says Evidence Should be Presented

Human Rights Watch (HRW) Europe and Central Asia Division Deputy Director Rachel Denber also warned that Kiev would be violating its human rights obligations if it was detaining Mr. Vyshinsky for without proof of any wrongdoing, and called for the evidence to be presented.

"The Ukrainian authorities should immediately clarify what, if any, evidence they have to substantiate the extremely serious criminal accusations they have launched against Vyshinsky. Criminalizing expression that represents views the authorities disapprove of is out of line with Ukraine’s human rights obligations," Ms. Denber told Sputnik on May 16.

She went on to say that the global fight against propaganda should not "lead to disproportionate interference in the work of journalists and media outlets."

Meanwhile, Don Debar, US host of the CPR radio newscast said Kiev is making excuses to “extinguish” free press access in the country.

“The puppet regime in Kiev lacks the public relations skills of its CIA sponsors. The claim that Russian media is an existential threat to the ‘western democratic values’ exemplified by the Bandera worshippers is used to extinguish the actual democratic right to a free press.”

The host went on to suggest that Ukrainian forces launched the raid in response to the opening of a 12-mile bridge connecting Crimea to the mainland.

“Mr. Vyshinsky's ‘crime’ in the eyes of this crew was by somehow ‘discrediting the Armed Forces of Ukraine’ by reporting the facts on the ground. This charge was brought almost simultaneously with the opening of the bridge between Crimea and the rest of the Russian Federation. Its purpose, and its timing, show how desperate and amateurish the Banderites are.”

PranSa
16 May 2018, 17:56 GMT3
000000
The US supports and arms the fascists and Nazis in Ukraine hoping to start a war with Russia through the Ukraine.... Using the Ukrainian people as a proxy army against Russia.....devide and conquer ....each former country of the Soviet Union the west has actively tried to turn them all against Russia to become proxy armies.....but sadly for the Ukraine many Ukrainians are starting to realize this....the west doesn't want the Ukrainians for any other purpose ....they only want a war between Ukraine and Russia.... Very sad for Ukrainians.....they would be far better off with Russia.....
Tazo
16 May 2018, 22:12 GMT3
000000
Newsfeed
0
New firstOld first
loader
LIVE
Заголовок открываемого материала
Access to the chat has been blocked for violating the rules . You will be able to participate again through:∞. If you do not agree with the blocking, please use the feedback form
The discussion is closed. You can participate in the discussion within 24 hours after the publication of the article.
To participate in the discussion
log in or register
loader
Chats
Заголовок открываемого материала
Worldwide
InternationalEnglishEnglishMundoEspañolSpanish
Europe
DeutschlandDeutschGermanFranceFrançaisFrenchΕλλάδαΕλληνικάGreekItaliaItalianoItalianČeská republikaČeštinaCzechPolskaPolskiPolishСрбиjаСрпскиSerbianLatvijaLatviešuLatvianLietuvaLietuviųLithuanianMoldovaMoldoveneascăMoldavianБеларусьБеларускiBelarusian
Transcaucasia
ԱրմենիաՀայերենArmenianАҧсныАҧсышәалаAbkhazХуссар ИрыстонИронауОssetianსაქართველოქართულიGeorgianAzərbaycanАzərbaycancaAzerbaijani
Middle East
Sputnik عربيArabicArabicTürkiyeTürkçeTurkishSputnik ایرانPersianPersianSputnik افغانستانDariDari
Central Asia
ҚазақстанҚазақ тіліKazakhКыргызстанКыргызчаKyrgyzOʻzbekistonЎзбекчаUzbekТоҷикистонТоҷикӣTajik
East & Southeast Asia
Việt NamTiếng ViệtVietnamese日本日本語Japanese中国中文Chinese
South America
BrasilPortuguêsPortuguese
NewsfeedBreaking
15:35 GMTSouth Korea Rejects Claim It Is Helping Taiwan With 'Indigenous Defence Submarine Programme'
15:27 GMTEpstein Competed With Trump to Seduce Young Women, Ex-POTUS' Accuser Claims
15:25 GMTGerman Court Sentences Iraqi to Life in World's First Case of Genocide Against Yazidis
15:01 GMTFBI Investigates Whether Long Island Blast Could be Linked to Terrorism
15:00 GMTRussian Startup Offers $200,000 for Right to Use Applicant's Face on Its Robot 'Forever'
14:59 GMTUK Spy Chief Urges Intel Services to 'Tap Into Global Tech' to Address 'Changing Nature of Threats'
14:52 GMTAlexander Lukashenko Says Poland-Belarus Refugee Crisis May be Resolved by Year-End
14:34 GMTSudan Denies Reports of Resumed Clashes at Border With Ethiopia
14:29 GMTFrance Needs Numerous Nuclear Reactors to Completely Re-Industrialize, Economy Minister Says
14:24 GMTIraqi Political Groups Reportedly Seek to Forge Bloc in Push to Drive US Forces From Country
14:22 GMTStoltenberg & Latvian Foreign Minister Deliver Remarks at NATO Foreign Ministers Meeting in Riga
14:20 GMTUS Revokes Terrorist Designation for Colombia's FARC
14:03 GMTWEF Says Will Continue to Prepare for Annual Meeting in Davos Despite Omicron Concerns
13:59 GMTIndian Opposition Demands That Bihar Chief Resign After Liquor Bottles Are Found in State Assembly
13:49 GMTTrump, 6 January Panel to Face Off in Federal Appeals Court Over White House Docs
13:37 GMTMinsk Ready to Deploy Russian Nuclear Weapons if NATO Systems Appear in Poland, Lukashenko Says
13:00 GMTPutin Undecided if He Will Run for President Again
12:49 GMTSudanese Police Use Tear Gas Against Demonstrators in Country's Capital - Photo, Video
12:39 GMTPETA Launches Fake Store Touting 'Human Leather Goods,' Slams Urban Outfitters
12:33 GMTResidents of Indian City Perform 'Pothole Worship' in Sign of Protest - Video