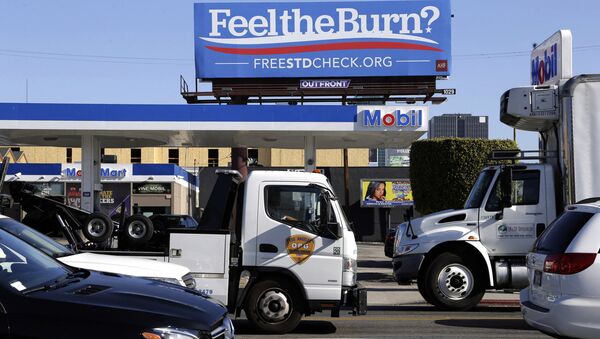 © AP Photo / Nick Ut
Subscribe
A record high number of Californians were diagnosed with sexually transmitted diseases in 2017, and the number of chlamydia, gonorrhea and syphilis cases have spiked by 45 percent over the past five years.

According to a new report released by the California Department of Public Health (CDPH) this week, there were more than 300,000 cases of chlamydia, gonorrhea and syphilis in the state in 2017. Chlamydia and gonorrhea were most widespread among people under 30, with the highest chlamydia rates being found in young women. Men made up the majority of syphilis and gonorrhea cases last year.

Chlamydia and gonorrhea are common sexually transmitted bacterial infections that often cause no symptoms. If left untreated, they can result in reproductive health problems, including pelvic inflammatory disease and infertility in women. Syphilis can also hijack the nervous system and lead to several serious symptoms including difficulty coordinating muscle movements, paralysis, dementia and sensory deficits, according to the Centers for Disease Control and Prevention. Syphilis is also caused by bacteria and can lead to very serious long term health issues, including brain disease and eventually death, if untreated. It increases the chances of acquiring and transmitting HIV.

In 2017, there were 30 stillbirths in California due to congenital syphilis, the highest number of cases reported since 1995. Congenital syphilis can be transmitted from a mother to her baby during pregnancy or delivery.

Congenital syphilis can cause babies to be born extremely prematurely and suffer from low birth weight, birth defects, blindness and hearing loss. It also causes stillbirths and infant deaths.

"STDs are preventable by consistently using condoms and many STDs can be cured with antibiotics," said CDPH Director and State Public Health Officer Karen Smith in a May 14 press release. "Regular testing and treatment are very important for people who are sexually active, even for people who have no symptoms. Most people infected with an STD do not know it."

Jeffrey Klausner, a professor of medicine at the University of California, Los Angeles, told the Associated Press that "for California to have a steady increase in congenital syphilis is shameful. We've known how to control syphilis since early 1900s. Seeing it come back like this is a sign of failure of the public health safety net."

"While there are advocates and champions for cancer, nobody is out there saying, ‘I have gonorrhea and these are the best ways to treat it,'" Klausner added. "There's no one out there being a champion for these conditions."

Dr. Heidi Bauer, chief of the state health department's STD Control Branch, told NPR that the increase in gonorrhea and syphilis can be attributed to multiple factors. For instance, the increase in gonorrhea and syphilis among gay and bisexual men could be because of the effectiveness of HIV/AIDS treatments, which might lull men into being less attentive about protection.

"Because of that, there is less concern about the transmission of HIV and using condoms," she said.

In addition, according to Bauer, "The internet and smartphones have made it very, very easy to create social and sexual connections between people." As a result, people are less likely to exchange contact information and discuss possible infections.

The CDPH is currently working with local health departments and organizations throughout California to increase STD awareness. The CDPH is also collaborating with the California Department of Education to better implement the California Healthy Youth Act, which took into effect in January 2016, to provide students with sexual health and STD prevention education at least once in middle school and once in high school.