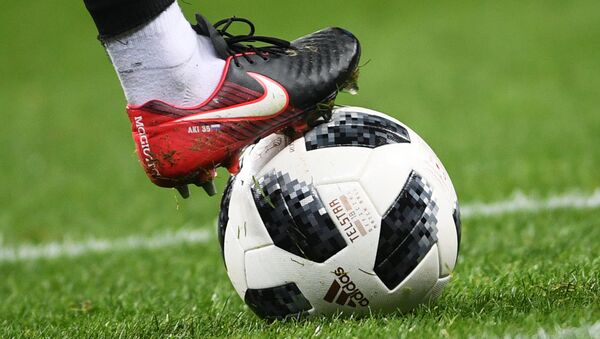 © Sputnik / Alexey Filippov
/
Go to the photo bank
Subscribe
Journalist Ignacio Catullo committed an act of wig snatching this week after revealing that a manual approved by the Argentine Football Association (AFA) on Russian culture included - though only briefly - a chapter on how to seduce Russian women.

The booklets, which were handed out Tuesday at the launch of a course on Russian culture, were meant for players, coaches, executives and reporters who would be heading to Russia for the 2018 World Cup in June, Clarín Deportes reported.

Though AFA officials realized the mishap prior to the start of the course and quickly ripped out the pages, Catullo was able to snap a few pictures of the various romantic suggestions put forth by the football association.

​Seen in photos provided by Catullo, tips for hitting it off with Russian women include making a good impression by staying clean and dressing well, not making them feel like objects and not being negative.

"Russian girls do not like to be seen as objects," one edifying suggestion begins. "Many men, because Russian women are beautiful, they just want to take them to bed. Maybe they also want it, but they are people who want to feel important and unique. The advice is to treat the woman who is in front of you as someone of value with their own ideas and desires. Pay attention to their values and personality. Do not ask stupid questions about sex. For Russians, sex is something very private and the subject is not discussed in public. (Maybe you do not believe me, but I know men who do it)."

"Russian women hate boring men. If you can't offer any topics for discussion and you just think about what you are going to say after she finishes talking, that means you are not enjoying the moment and thereby losing the 'connection' with her. Remember, you are a foreigner and you may talk about your native land, the way you live, or focus on interesting things that you've seen in your home country. It is crucial to engage her in the conversation, so try talking to her in most sincere and frank way."

It also stressed to not "ask stereotypical questions… so that she'll find it interesting to get to know you."

"Don't be shy" was another directive. "Russian women like it when men take initiative," according to the manual. "If you are not self-confident, it makes sense first to speak to other women, in order not to be too shy when you meet a Russian one." But then again, don't be a blowhard: Russian women "don't like it when one 'monopolizes' a conversation. You'd be better off then changing the way you behave, or if you feel nervous, just calm down: this is just a woman, nothing more."

​​With netizens roasting the AFA over the booklet, Alejandra Taraborelli, an official with the association's Department of Education, released an apology Wednesday, stating that the chapter was an "involuntary error."

"We regret that this mistake has overshadowed the importance of the day and the permanent educational activity provided by AFA, expressing our most sincere apologies to those who were affected by the publication, which in no way reflects the thinking of the Argentine Football Association, nor that of its President Claudio Tapia or any of its directors," it concluded.

The booklet, entitled "Russian Language and Culture," was put together by the Sports, Social Responsibility and Sustainability Commission of the AFA, according to Clarín Deportes.

Aside from Argentina, the only other South American countries that qualified for the tournament are Brazil, Colombia, Peru and Uruguay. The tournament runs from June 14 to July 15.

000000
Popular comments
that also says something about the type of males who play the game in argentina, if it is considered that such advice be put in writing.
michael
17 May 2018, 00:06 GMT
000000
I think these are excellent pointers for any man who wishes to form a relationship with any woman. Why apologise for it? Why rip it out?
Medvezhonok
17 May 2018, 00:19 GMT1
000000
Newsfeed
0
New firstOld first
loader
LIVE
Заголовок открываемого материала
Access to the chat has been blocked for violating the rules . You will be able to participate again through:∞. If you do not agree with the blocking, please use the feedback form
The discussion is closed. You can participate in the discussion within 24 hours after the publication of the article.
To participate in the discussion
log in or register
loader
Chats
Заголовок открываемого материала
Worldwide
InternationalEnglishEnglishMundoEspañolSpanish
Europe
DeutschlandDeutschGermanFranceFrançaisFrenchΕλλάδαΕλληνικάGreekItaliaItalianoItalianČeská republikaČeštinaCzechPolskaPolskiPolishСрбиjаСрпскиSerbianLatvijaLatviešuLatvianLietuvaLietuviųLithuanianMoldovaMoldoveneascăMoldavianБеларусьБеларускiBelarusian
Transcaucasia
ԱրմենիաՀայերենArmenianАҧсныАҧсышәалаAbkhazХуссар ИрыстонИронауОssetianსაქართველოქართულიGeorgianAzərbaycanАzərbaycancaAzerbaijani
Middle East
Sputnik عربيArabicArabicTürkiyeTürkçeTurkishSputnik ایرانPersianPersianSputnik افغانستانDariDari
Central Asia
ҚазақстанҚазақ тіліKazakhКыргызстанКыргызчаKyrgyzOʻzbekistonЎзбекчаUzbekТоҷикистонТоҷикӣTajik
East & Southeast Asia
Việt NamTiếng ViệtVietnamese日本日本語Japanese中国中文Chinese
South America
BrasilPortuguêsPortuguese
NewsfeedBreaking
17:46 GMTBlast Reportedly Heard in Iranian Town of Natanz, Where Nuclear Site Located
17:32 GMTSouth African Province at Centre of Omicron COVID Variant Sees More Children in Hospital
16:54 GMTPolish Prime Minister Orders Cybesecurity Alert Ahead of UN Forum
16:52 GMTGreek Prime Minister Assures Vatican That Condition of Migrants in Greece Improved
16:21 GMTUS Warns of ‘Terrible Consequences’ of Possible Chinese Invasion of Taiwan
16:14 GMT‘Killer Robots’ Threat Persists as US Unwilling to Discuss Ban on Lethal Autonomous Weapons Systems
16:00 GMTLionel Messi Reveals He 'Never' Wanted to Become Best Football Player
15:39 GMTPutin, Biden Will Hold a Video Call on Tuesday Evening
15:36 GMTGiant Christmas Tree Set Up Near Church of the Nativity in Bethlehem
14:52 GMTParty Like It's 1939: German Chancellor's Send-Off Compared to Nazi Rally
14:48 GMTParents of Michigan School Shooter Suspect Plead Not Guilty to Involuntary Manslaughter Charges
14:26 GMTFrance's Republicans Party Picks Valerie Pecresse as Presidential Candidate
14:10 GMTOne of Critical Race Theory Founders Says He's Been Receiving Voicemails 'Full of Venom' for Months
14:07 GMTPaw Control: Cat Owners in UK May Face £500 Fine for Not Microchipping Their Pets
14:03 GMTDanish Company Wants to Rent a Russian Kuril Island to Make 'Green' Hydrogen for Japan
13:43 GMTNo Coronavirus, No Moon Landing: Survey Shows High Trust in Conspiracy Theories in Italy
13:42 GMTAt Least One Dead, 41 Suffer Burn Injuries After Indonesia's Semeru Volcano Erupts
13:29 GMTChinese Yutu-2 Rover to Study Mysterious Cube-Shaped Object on Moon, Report Says
13:15 GMTPrince William Had Secret 'Cyber Relationship' With Britney Spears, Lauren Bush, New Book Claims
13:15 GMTNot Quite a Shot in the Arm: Italian Anti-Vaxxer Sports Fake Limb in Attempt to Get COVID Cert