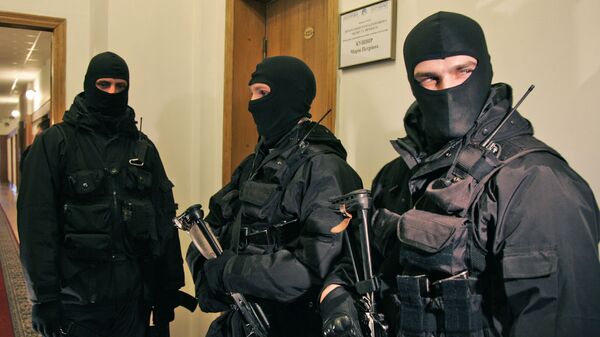 KIEV (Sputnik) - The Ukrainian Security Service (SBU) broke into the office of RIA Novosti Ukraine news agency in Kiev on Tuesday, a journalist who was inside building dropped out of contact.

The Ukrainian Security Service (SBU) operatives have completed a search of the premises of the RIA Novosti Ukraine office in Kiev, which continued for about eight hours, a RIA Novosti correspondent reported on Tuesday.

On Tuesday morning, people wearing a uniform with the SBU insignia came to the office. Eyewitnesses saw people, who were carrying a jack, entering the building, where the office was located. After that, the journalist who was in the office at the time stopped communicating.

Earlier in the day, RIA Novosti journalist Kirill Vyshinsky was detained by Ukrainian law enforcement officers next to his house in Kiev.

The journalist was detained on Tuesday morning next to his house in Kiev.

"Kirill Vyshinsky was detained in Kiev by law enforcement agencies, investigative actions in his respect are underway," the lawyer said.

Searches are underway in an apartment of a Ukraine-based correspondent of the RIA Novosti news agency, Ludmila Lysenko, her lawyer told Sputnik.

"She is home now, searches in her apartment are coming to an end," the lawyer said.

The lawyer added that the correspondent would be brought in for questioning by the Ukrainian Security Service on Friday.

"The Ukrainian authorities should immediately release detained RIA Novosti journalist Kirill Vyshinsky, stop persecution of media. This is not the first time when the Kiev regime tramples on fundamental rights and freedoms, persecutes journalists… We will address international structures, including those related to journalism, in the OSCE, in order to stop the persecution of journalists in Ukraine," Director General of Rossiya Segodnya International Information Agency Dmitry Kiselev said.

Margarita Simonyan, Sputnik Editor-in-chief, expressed hope on Tuesday that Russia would respond to the actions of the Ukrainian Security Service regarding RIA Novosti Ukraine journalists in Kiev.

Ukraine's Security Service (SBU) believes that RIA Novosti Ukraine journalist Kirill Vyshinsky, who was detained in Kiev, has a dual citizenship, the Ukrainian authorities will consider the issue of stripping him of the Ukrainian citizenship, SBU Deputy Head Viktor Kononenko said on Tuesday.

"We thought that he was a citizen of Ukraine. But a Russian passport was found during searches, in other words, this individual has a dual citizenship. Apart from legal proceedings, the issue of stripping him of Ukrainian citizenship will be addressed," Kononenko told a briefing.

The Ukrainian security services suspect RIA Novosti Ukraine journalist Kirill Vyshinsky, who was recently detained in Kiev, of treason, an official from the Ukrainian prosecutor’s office for Crimea, said on Tuesday.

"At the moment, the violation of law is preliminary classified as the Part 1 of the Article 111 [of the Criminal Code of Ukraine], it is treason," Ihor Ponochovny said at a briefing. 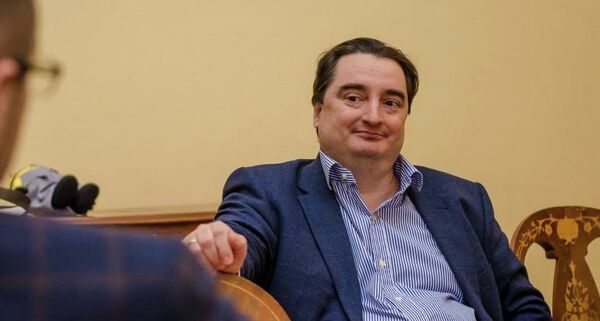 Watchdog: Ukraine Must Probe Death Threats Against Fled Journalist
The Russian Foreign Ministry earlier called on OSCE countries and the Council of Europe, as well as international organizations, to condemn Kiev's policy against the media. In December 2017, the UNHCHR noted the alarming trend of the expulsion of foreign journalists from Ukraine, with the label of "propagandists," being the reason for their deportation, and called for more careful consideration of such restrictive measures.

Kiev has repeatedly restricted the work of Russian media in the country, including regularly barring Russian journalists from entering Ukraine. In March 2015, 115 Russian media outlets were suspended accreditation by Ukrainian authorities. In Ukraine, broadcasts by major Russian TV channels are also banned. The Russian Foreign Ministry has called the disconnection of Russian TV channels an attack on media freedom and called on the OSCE, the EU and the US to react toughly to this ban, as well as to the deportation of Russian journalists from Ukraine, saying that double standards in this area practiced by the West are unacceptable.