The US build-up of its military presence in Syria comes amid reports of the creation of new military bases across the war-weary Arab nation.

Iran's Fars news agency has cited sources as saying that a new US military base is being set up in Syria's eastern Deir ez-Zor province.

The base, which is located in the Badiyeh al-Sha'afa area, will be equipped with "advanced military tools and systems," according to the sources.

The reports come a week after Sharfan Darwish, spokesman for the Manbij Military Council of the US-backed Syrian Democratic Forces (SDF), said that the US military had created a new military base in the Syrian region of Manbij about three months ago, following Ankara's threats to seize control of the area.

READ MORE: US Military Presence Near At-Tanf Base in Syria 'Aggression' — Damascus

Darwish was quoted by Reuters as saying that "after the Turkish attack on Afrin and the increase in Turkish threats towards Manbij, coalition forces built the base to monitor and protect the border [between the combatants]." 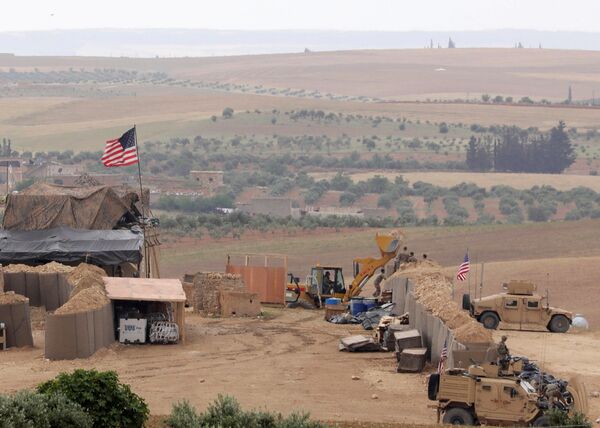 For its part, Fars reported last month that a new US military base had been established at the al-Omar oilfield in southeastern Deir ez-Zor, where a variety of military hardware, including missile systems and armored vehicles, had been deployed.

On March 28, Turkey warned that it would push its military operation in the northern district of Afrin further to Manbij, if the US-backed Kurdish People's Protection Units (YPG) forces decline to pull out of the region.

Ankara is seeking to gain control of Manbij as part of its Operation Olive Branch, which was launched on January 20, 2018. Ankara has blacklisted the YPG, the backbone of the SDF, as an affiliate of the Kurdistan Workers' Party (PKK), which is outlawed in Turkey as a terrorist organization.

In a separate development in April, US Secretary of Defense James Mattis declared that the US military would not withdraw its forces from Syria, but would expand operations there and "bring in more regional support."

Turkish Op in Syria: US Promises to Retaliate Against Any Attack on Manbij – SDF
Earlier, President Donald Trump announced that the US troops would leave Syria in the near future, a statement which was met with a conflicting reaction from the president's special envoy to the US-led coalition Brett McGurk as well as incoming US Secretary of State Mike Pompeo and Joint Chiefs of Staff Chairman Joseph Dunford.

The US-led coalition has been launching airstrikes against what it calls Daesh* targets in Syria since 2014, in a mission that was approved neither by Damascus nor the UN. Right now, about 2,000 US troops are deployed in Syria.