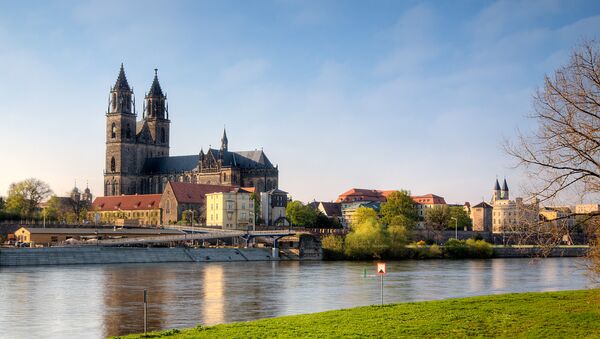 CC BY-SA 3.0 / Carlarocaoporto / The city of Magdeburg
Subscribe
After alleged xenophobic abuse, a 23-year-old unleashed his two dogs at a group of Syrians. One man was injured in the incident. The police are currently looking for witnesses, as the statements of the participants differ.

A 29-year-old Syrian has been admitted to hospital with severe injuries inflicted by two so-called fighting dogs after a dispute with a local man in Magdeburg in Eastern Germany. The incident occurred in one of the city’s local parks, where the Syrian was with his family and acquaintances. The victim was reportedly subjected to racial abuse by a 23-year-old Magdeburg resident, who after a verbal argument approached the group with his two dogs and unleashed them on the family.

The details of the conflict are yet to be determined, as the police have stated. A police spokesperson has told the Spiegel outlet, that "There are different versions of the story." Police are looking for witnesses now to find out what exactly happened during the dispute.

​Dog attack in Holzweg #Magdeburg. Last night there was a dispute between a Magdeburg resident and a Syrian family. The Magdeburger’s dogs bit the Syrian father who had to go to hospital. We are looking for witnesses to the dispute.

It’s been reported that the father tried to shield his children, who are five and eight years old, and his partner, but was put into a headlock by the suspect, while the dogs bit him several times. The victim is at present being treated in a hospital for serious bites on the arms, legs and upper body.

In the wake of the attack, the suspect, reported for causing dangerous bodily harm, has been identified by officials. The dogs, which are said to be a Staffordshire half-breed and a French Bulldog mixed-breed, have been taken to a shelter. The suspect hasn’t been arrested yet, as the investigators are looking for more witnesses.

According to the German broadcaster DW, the capital of the eastern German state of Saxony-Anhalt, Magdeburg, has been the site of several attacks on foreigners following the influx of refugees during the course of the so-called “opened borders” policy. Since it was introduced by the federal government in the second half of 2015, Germany has become a key EU recipient of asylum seekers.

Last year, the German Federal Statistical Office (Destatis) reported that the country’s population increased by 600,000 in 2016 and had reached 82.8 million due to the influx of migrants, noting that at the end of 2015 the number was only 82.2 million people.