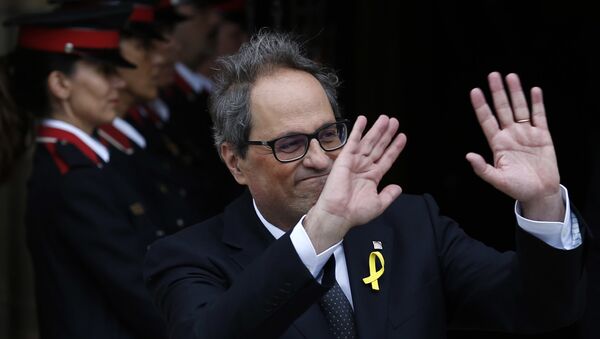 © AP Photo / Manu Fernandez
Subscribe
On Monday, the Catalan Parliament elected Quim Torra, a lawmaker from the Junts per Catalunya party, as president of the autonomous Spanish region.

However, Torra claims he is just the interim head of the Catalan government, since he believes that exiled former Catalan leader Carles Puigdemont is by rights the true head of the cabinet. Puigdemont fled Catalonia to Belgium following the region's independence referendum in October. He is now in Germany, and facing possible extradition to Spain, where he is wanted on rebellion charges.

​Dick Nichols, a former National Convenor of the Socialist Alliance and a correspondent for Green Left Weekly, told Radio Sputnik's Loud & Clear that the Spanish state's repression of Catalonia's democratic rights is a war "being fought without guns."

The autonomous region of Catalonia held a referendum on independence on October 1, 2017, in which more than 90 per cent of the 2.26 million Catalans who participated in the vote supported the region's secession from Spain.

Madrid called the vote illegal and subsequently imposed direct rule over the autonomous region and dismissed its government. Several ministers of the former Catalan government, including Puigdemont, were arrested and fled to Belgium in October to avoid sedition charges. Puigdemont is currently fighting extradition from Germany after avoiding prosecution in Spain on rebellion and misuse of public funds charges. German police arrested Puigdemont in April as he attempted to cross the country by car from Denmark to Belgium.

In January, Spanish Prime Minister Mariano Rajoy said that Catalonia would not be permitted to return to self-government, which was revoked under Article 155 of the Spanish Constitution after the referendum, until a new head of government is legally appointed in the autonomous region.

"It is unacceptable that he [Puigdemont] becomes the head of the government remotely, aided by intermediaries or by other means. In order to come to power, he must be physically present… If this does not happen, the Article 155 will remain in force," Rajoy said in January.

Rajoy then dismissed the Catalan government and its head and called a snap Catalan parliamentary election. In that election, on December 21, the region's pro-independence bloc won an absolute majority in the parliament.

"The Spanish state wanted to prove their point by not endorsing those people who they had brought criminal charges against. In the end, they arrived at Quim Torra: he is a close follower of Puigdemont, but he doesn't have criminal charges hanging over his head," Nichols told Radio Sputnik's Loud & Clear.

Torra's candidacy was backed by 66 lawmakers from the Junts per Catalunya and Republican Left of Catalonia parties, while 65 lawmakers from parties who support Spain's territorial integrity — and thus oppose Catalan independence — voted against his appointment. Four representatives of the pro-independence Popular Unity Candidacy abstained.

Torra has promised to draft a constitution for a future Catalan state.

However, according to Nichols, "the basic problem is that the Spanish government never thought they would lose the December 21 election. It has not been resolved and cannot be resolved. Once again, Catalonia has become the hot potato in Spanish politics."

"This is a war of attrition being fought without guns. It is being fought through the legal system and is now increasingly being fought as a battle of public opinion in Europe. The Spanish legal system is now on trial. It's about the right of Catalonia to decide and what type of society we want," Nichols told Radio Sputnik.