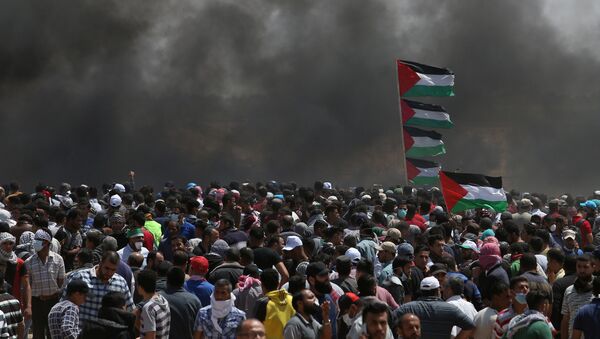 The situation along the Israel-Gaza Strip border has been tense over the last several weeks, as Palestinians have been holding mass rallies against US embassy relocation to Jerusalem.

"The US administration is as responsible as the Israeli government for this massacre," Deputy Prime Minister Bekir Bozdag wrote on Twitter, stating that the incidents were caused by "unjust and unlawful decisions" as the United States moves its embassy in Israel from Tel Aviv to Jerusalem.

The death toll of Palestinians killed by Israeli fire in Gaza border clashes has risen to 52, according to the latest reports of the Palestinian Health Ministry.

"The relocation of the US Embassy in Israel to Jerusalem will increase instability and escalate crisis and conflicts in the region. The United States bears the same responsibility for mass murders in Gaza, as the Israeli government. Regardless of the future steps taken by the United States and Israel, Turkey will not recognize them," Bozdag said on his Twitter account.

The policy of Israel and the United States has also been criticized by Turkish Foreign Minister Mevlut Cavusoglu, who also said that the relocation of the embassy made a lot of harm to the image of Washington.

Cavusoglu added that it was important to oppose the US decision while classifying the Israeli steps as "state terrorism."

Clashes Erupt as Palestinians Rally Against US Embassy Move in Jerusalem (VIDEO)
The Israel Defense Forces have repeatedly reported numerous attempts by Palestinians to break through the country's security fence amid the ongoing protests, warning Palestinians against approaching the fence.

For six weeks, Palestinians have been holding mass rallies, so-called the Great March of Return, near the Gaza Strip border.

During these protests, dozens of Palestinians have been killed, and over 1,000 others have been injured as the Israeli forces continue to suppress the demonstrations.