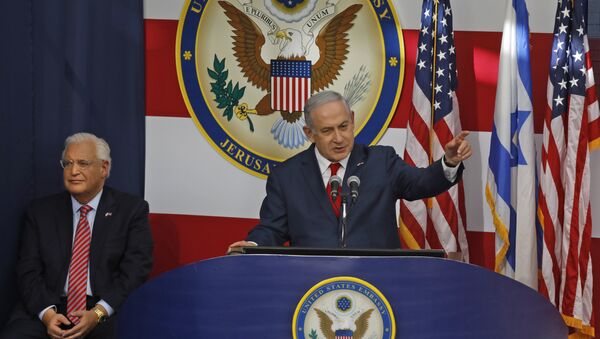 The US has declared its embassy in Jerusalem open during a ceremony that had kicked off on Monday at 4 p.m. local time.

In December, Donald Trump announced his decision to recognize Jerusalem as Israel's capital and instructed the US State Department to launch the process of moving the US Embassy, located in Tel Aviv, to Jerusalem.

Israeli Prime Minister Benjamin Netanyahu said that "this is a day that will be engraved in our national memory for generations," speaking at the ceremony in Jerusalem.

"We are in Jerusalem and we are here to stay," Netanyahu added.

The move prompted criticism from a number of states, particularly Palestine and countries in the Middle East, and triggered a wave of protests in the region.

UK Has no Plans to Move Embassy to Jerusalem, Disagrees With US on Issue - May
Meanwhile, violent rallies continue on the border with the Gaza Strip, with up to 15,000 Palestinians protesting against the relocation.