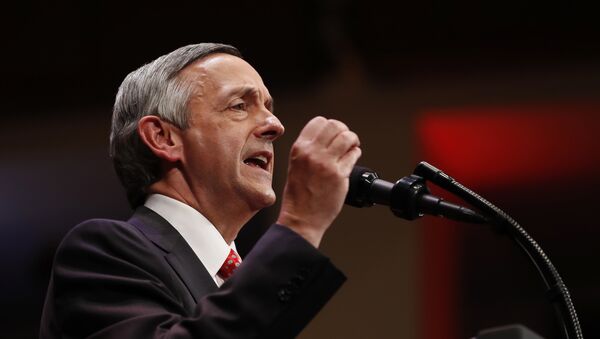 Southern Baptist preacher Robert Jeffress is notably a keen Trump supporter, and, separately, is known to have called homosexuals "perverts," billed Mormonism "a heresy" from hell, and made derogatory remarks toward Jews.

Texas-based evangelical pastor Jeffress headed to Israel on Monday to say a prayer at a ceremony dedicated to the opening of the US Embassy in Jerusalem, The Haaretz reported.

On Sunday, Republican Mitt Romney said the prominent Baptist minister is not an appropriate candidate to give the prayer that opens the US Embassy on Jerusalem soil, citing his "religious bigotry." The 2012 Republican presidential nominee and now Senate candidate Romney blasted the preacher on Twitter for his statements about Jews, Muslims as well as Mormons, who himself is Mormon.

Robert Jeffress says “you can’t be saved by being a Jew,“ and “Mormonism is a heresy from the pit of hell.” He’s said the same about Islam. Such a religious bigot should not be giving the prayer that opens the United States Embassy in Jerusalem.

The Open House for Pride and Tolerance, a Jerusalem-based LGBT activist organization, also joined in the criticism, saying pastor Jeffress had earlier billed homosexual rights promoters as "pedophilia activists," and gays as "perverts." He is also known for having declared that many groups including Jews would go to hell, as they, according to him, stood no chance of salvation.

Jeffress made his critical remarks about Jews, Muslims and Mormons at the Values Voter Summit in 2011 adding that his conservative church should not try to evolve by being tolerant to other confessions. He went on to defend his statements on Monday, in response to Mitt Romney’s comments:

"Historic Christianity has taught for 2,000 years that salvation is through faith in Christ alone. The fact that I, along with tens of millions of evangelical Christians around the world, continue to espouse that belief is neither bigoted nor newsworthy," he said.