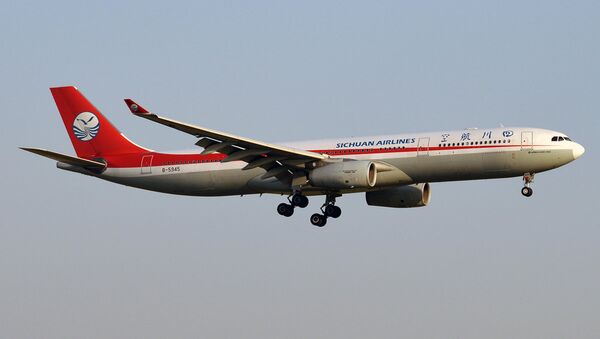 Sichuan Airlines Flight 3U8633 was forced to make an emergency landing at China's Chengdu Shuangliu International Airport on Monday after one of the airplane's cockpit windows fell off mid-flight.

According to Reuters, though no passengers were injured in the incident, the Civil Aviation Administration of China's Southwest Regional Administration (CAAC) stated that one of the pilots suffered scratches and waist pains. A flight attendant also received a minor injury during the accident.

​The domestic flight, which was traveling from Chongqing to Lhasa, landed at the Chengdu Shuangliu airport roughly 20 minutes after the window broke.

Speaking to Red Star News, pilot Liu Chuanjian revealed that seconds after the malfunction, his fellow pilot started to get sucked out of the window, along with parts of the plane's control unit.

"The windshield cracked suddenly and gave a huge bang. I looked aside and found half of the co-pilot's body was already outside the window. Fortunately his seat belt was fastened," the South China Morning Post reported Liu saying. "The sudden loss of pressure and low temperature made me very uncomfortable and it was very difficult to make a single move when the aircraft was flying at 900 kilometres an hour and at such a high altitude."

Science & Tech
‘Out There Thinking’: Qantas Airlines May Replace Cargo with Gyms, Beds

The Post reported that the plane descended from 32,000 feet to 24,000 feet before Liu was able to regain his composure and maneuver the plane.

With the plane's autopilot system down, Liu added that he had no other choice than to fly the craft manually and that he felt confident in doing so because he has "flown this route 100 times and knows everything very well."

A passenger, Zhao Shihai, told the China Youth Daily that he realized what was going on when he was woken up by strong turbulence, which later subsided after the flight crew managed to close the cockpit door that had been pushed open.

"I was thrown up in the air and fell for several times," Zhao told the outlet. "The oxygen masks on the plane all dropped out."

Sichuan Airlines stated on their Weibo account that the flight had experienced a "mechanical failure" and that passengers were later put on another flight to Lhasa. The airline did not offer any further details on the incident.

Preliminary findings indicate pilots received a failure message on the plane's control unit regarding the windshield moments before disaster struck, the Aviation Herald reported. Officials with the CAAC are still investigating.

This incident comes weeks after a Southwest Airlines plane made an emergency landing in Cleveland, Ohio, after a passenger alerted flight staff of a cracked window.