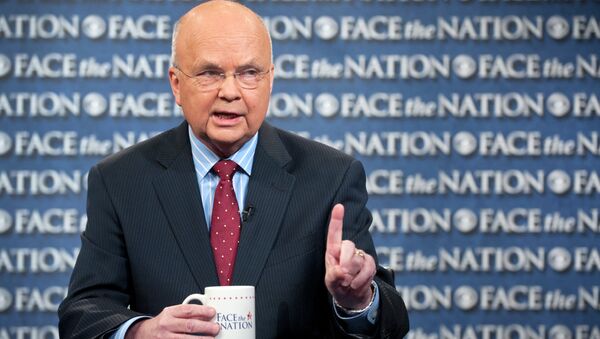 © AP Photo / CBS News, Chris Usher
Subscribe
The former boss of the NSA and CIA, Michael Hayden, predicts that the decision to re-impose sanctions on Iran despite protests from EU leaders will harm US relations with its allies and lead to a trans-Atlantic argument.

Commenting to German media outlet Spiegel on the recent decision of the US president to abandon the 2015 JCPOA, the former head of the NSA and CIA, General Michael Hayden, stated:

“The first line of confrontation is not with the Iranians, but with our European friends. They have a legitimate right to get an answer to the questions, ‘Do our views matter? Do the Americans take our views into consideration?’ In addition to whatever it may or may not do in the Persian Gulf, it will alienate our best friends in the world, and we'll end up with a trans-Atlantic argument.”

The national security advisor of the United States, John Bolton, recently said in an interview with CNN news that the US did not exclude sanctions against EU companies that cooperate with Tehran after the US withdrawal from the Iran nuclear deal. He also noted that he hoped the Europeans would see that it was in their best interest to reach an agreement with Washington on Iran.

These claims came hot on the heels of reports that Europe and France had discussed with the US the possibility of further exemptions for European companies that could be affected by US economic sanctions on Tehran in order to "defend their economic interests," as a number of French enterprises, including Total, Renault and Sanofi, are operating in Iran.

Meanwhile, General Hayden claimed that the efforts of the European leaders to hold the US in the deal remained in vain as Trump’s move is based on something other than what would be expected from a president. The former top intelligence official argues that Trump “is opposed to free trade, who views immigrants as a threat and who views allies as a burden.”

“He [Donald Trump] doesn't make decisions based upon objective reality. He has this kind of a priori, assumed narrative of the way the world works, and he has almost a natural self-confidence in it,” Hayden stated.The general also pointed out the lack of opinion diversity, saying that the incumbent US president “seems to be surrounding himself with fewer naysayers and more people who seem to think and sound more like he does.”

Hayden claimed that the policy, led by the current administration, contradicts the basic US approach, which is relational, not transactional.

“The president now just bent Britain, France, and Germany to America's will, and he's going to celebrate this as a "victory" – in air quotes. He'll view that as a transactional success. But relationally, it's a disaster, and the problem is that the costs of this 'victory' are long term and hard to measure,” the general said, cited by the German outlet.

Donald Trump decided to abandon the 2015 accord after months of teasing and denouncing the deal on May 8. Prior to this move, French President Emmanuel Macron came to Washington to sway Trump from abandoning the accord, as did German Chancellor Angela Merkel and British Foreign Secretary Boris Johnson.

The Joint Comprehensive Plan of Action (JCPOA) was signed in 2015 by Iran on the one hand and the United States, Russia, China, the United Kingdom, France, Germany and the European Union on the other. The deal promised Iran relief from sanctions in exchange for a commitment not to engage in the development of a military nuclear program. The president called the JCPOA a "horrible, one-sided deal that should have never, ever been made" and suggested that it was "defective at its core." Trump promised "powerful" US sanctions against Iran, which would go into full effect.

Meanwhile, inspections by the International Atomic Energy Agency, the foremost authority on the matter, have repeatedly affirmed that Iran is in full compliance of the JCPOA. The agency has insisted that Iran "is subject to the world's most robust nuclear verification system."

000000
Popular comments
Swampthing said it in his campaign America first, wich means the rest of the world be damned & we probably will be by the end of his presidency.

Dungeon Ambassador from Terra
14 May 2018, 14:47 GMT3
000000
Michael Hayden is right in his observation ! Beyond any daub !!! He has a good far ahead thinking !!! Trump is hard minded and think he can force his friends (if he has some left) to do what he like's. Also this time he have a good change to com thru. The Eu on the end will complain but buck down and say yes PLS !!