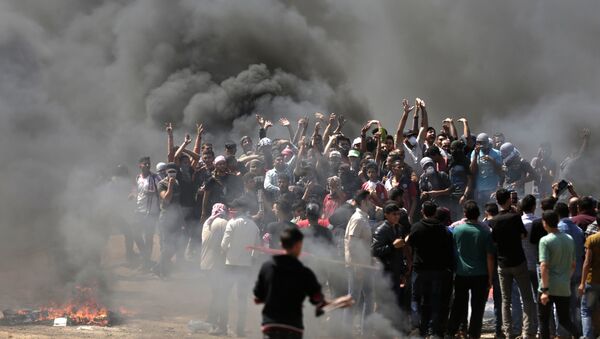 The US Embassy in Israel has officially opened in Jerusalem on Monday after its controversial relocation from Tel Aviv that sparked widespread concern, as the city of Jerusalem is contested by Israel and Palestine as their capital.

According to the latest information from the Palestinian Health Ministry, at least 52 Palestinians were killed and over 1,200 wounded by Israeli fire. The Qatari broadcaster Al Jazeera reported that one of its reporters, Wael Dahdouh, had been wounded during the Palestinian-Israeli clashes in the Gaza Strip by live ammunition fired by Israeli forces.

The broadcaster has not, however, revealed any details of the incident.

Israeli army reports of 12 clashing points along the fence, with Karni and Rafiah crossings being the largest two.

More than 10 thousand Palestinians are reportedly participating in protests in the Gaza Strip against the opening of the US Embassy in Jerusalem. The rally has already reportedly resulted in injuries of 22 people.

The Israel Defense Forces (IDF) killed three Palestinian militants who were attempting to plant explosives along the Gaza Strip border amid the ongoing protests known as the Great March of Return, the IDF spokesperson said on Monday.

Palestinian government spokesman Yusuf al-Mahmoud demanded, "an immediate international intervention to stop the terrible massacre in Gaza committed by the forces of the Israeli occupation against our heroic people."

According to Gaza health officials, the Israeli forces have shot one Palestinian protester dead amid mass demonstrations.

Mass border protests against Israel will continue until Palestinians have achieved their rights, according to Gaza's ruling Hamas group senior figure Ismail Radwan.

At the same time, the Israeli army has deployed reinforcements along Gaza and the West Bank in the anticipation of a possible escalation and attempts to penetrate the borders in the run-up to the so-called Nakba Day on May 15 — the day that commemorates the Palestinian exodus that occurred as a result of Israel's declaration of independence in 1948.

Earlier in the day, the Israeli Defense Forces (IDF) announced that their jets had distributed leaflets across the Gaza Strip warning Palestinians against approaching the security fence on their shared border and engaging in life-threatening activities during riots, and stressed their determination to protect Israel's sovereignty and security.

"In recent weeks, Hamas has been carrying out violence and terror against Israel, its boundaries, and the Gaza Strip. Hamas is trying to hide its many failures by endangering your lives … You deserve a better government and a better future. The IDF is warning you against approaching the security fence. The IDF is determined to protect Israel’s citizens and sovereignty against Hamas’ attempts to terrorize us under the pretense of violent riots. Do not approach the security fence and do not participate in Hamas’ life-threatening farce," the leaflet, published by the IDF on Twitter, read.

Trump Contradicts Israeli PM on US Embassy Move Timing
The Gaza protests are expected to further intensify in the wake of the US embassy transfer to the disputed city of Jerusalem, a move that has been strongly condemned by Muslim countries, as well as states, backing the two-state solution to the Israeli-Palestinian crisis.