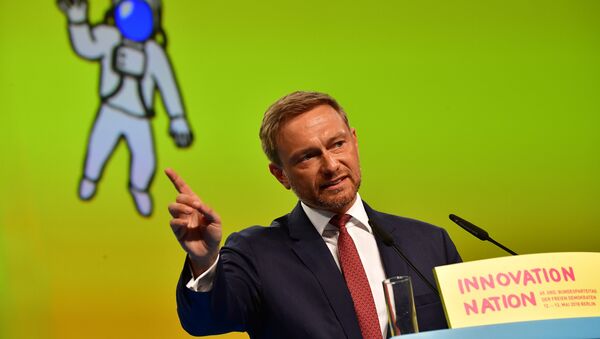 © AFP 2021 / TOBIAS SCHWARZ
Subscribe
The young leader of Germany’s classical liberal Free Democrats, Christian Lindner, has slammed “hysteria” around his comment on xenophobia. What was intended by the politician as an example of the unrest illegal immigration can cause has triggered the vitriol on Twitter.

Chief of Free Democratic Party of Germany Christian Lindner has repelled accusations of racism and indulging the Nazis, which rose after his comment during a party convention on May 12.

"When you're standing in line in the bakery and someone in front of you orders a sandwich in broken German you can't discern whether he is a highly qualified artificial intelligence engineer from India or a foreigner who is being tolerated here illegally,” he’d said, trying to prove his point on the drawbacks of the current immigration policy.

He stressed: "People need to be sure, even if someone else looks and speaks only broken German, that there is no doubt about his legal status. That is the task of a demanding, liberal constitutional immigration policy."

READ MORE: Germany's Problems Will Not Be Solved by the Inflow of Migrants — Specialist

The leader of the business-friendly FDP had intended to illustrate his standing on illegal immigration and its impact on society with the metaphor. Instead, it triggered an array of commentators, Twitter users and racism-watchers, including within his own party, who blamed Lindner for indulging intolerant behavior.

FDP member Chris Pyak even marched out of the party, claiming Lindner’s remark was essentially a justification of Nazis harassing people with dark skin.

​I has just left the FDP. "Citizens must be sure that the foreigner at the bakery isn’t illegal." In his speech, Christian Lindner has given all Nazis an excuse to harass dark-skinned people.

​Dear @c_lindner I'm not afraid of people who speak broken German. I am afraid of those who, in their delusion, do not realize that they are human beings. I see none at the tip of his nose, if he has dirt on the plug. Because neither of that is the thing.

However, some were more light-hearted and taken everything with humor.

​The problem is that Christian Lindner obviously has not been standing in line for far too long.

Others pointed out that scandal was artificial.

​The equally artificial and arrogant fury about the alleged bakery racist Christian Lindner illustrates the whole misery of the German culture of debate: every fart is discriminatory, racist, sexist apostrophized, it's almost nothing.

Following the debates, the FDP Chief decided to give an extra explanation for his anecdote on Twitter, stating that "Whoever thinks my comments were racist or right-wing populist, is being hysterical, as such debates should be more sensible and sober.”

​He pointed out that his anecdote was based on a true story of a foreigner who faced xenophobia during the recent years, Germany has experienced migrant crisis with influx of hundreds of thousands of refugees from the Middle East and Africa. He elaborated on his initial idea, saying this challenge can be responded with acting in accordance with the “rules of law.” The opposite situation creates unrest in the society, according to Lindner.

The FDP came forth in the recent 2017 parliamentary elections in Germany, giving way to the right-wing Alternative for Germany, which made a tougher stance on migration policy its cornerstone. At the same time, the FDP's leader found support among the AfD platform after he walked away from building a government coalition with Angela Merkel’s Christian Democratic Union and Christian Social Union. Following the move, for which Lindner was dubbed a coalition breaker, a poll by the German public broadcaster ARD showed that 64 percent of AfD voters saw him in a positive light. This is nearly three times more than the pre-election result (25 percent before the September election). Even the AfD co-leader, Alexander Gauland, came behind him in the study with a 58 percent approval rating.

000000
Popular comments
the problem is that one never knows what is genuine and what has been set up for local consumption - by either side of the debate.
michael
16 May 2018, 02:43 GMT
000000
Newsfeed
0
New firstOld first
loader
LIVE
Заголовок открываемого материала
Access to the chat has been blocked for violating the rules . You will be able to participate again through:∞. If you do not agree with the blocking, please use the feedback form
The discussion is closed. You can participate in the discussion within 24 hours after the publication of the article.
To participate in the discussion
log in or register
loader
Chats
Заголовок открываемого материала
Worldwide
InternationalEnglishEnglishMundoEspañolSpanish
Europe
DeutschlandDeutschGermanFranceFrançaisFrenchΕλλάδαΕλληνικάGreekItaliaItalianoItalianČeská republikaČeštinaCzechPolskaPolskiPolishСрбиjаСрпскиSerbianLatvijaLatviešuLatvianLietuvaLietuviųLithuanianMoldovaMoldoveneascăMoldavianБеларусьБеларускiBelarusian
Transcaucasia
ԱրմենիաՀայերենArmenianАҧсныАҧсышәалаAbkhazХуссар ИрыстонИронауОssetianსაქართველოქართულიGeorgianAzərbaycanАzərbaycancaAzerbaijani
Middle East
Sputnik عربيArabicArabicTürkiyeTürkçeTurkishSputnik ایرانPersianPersianSputnik افغانستانDariDari
Central Asia
ҚазақстанҚазақ тіліKazakhКыргызстанКыргызчаKyrgyzOʻzbekistonЎзбекчаUzbekТоҷикистонТоҷикӣTajik
East & Southeast Asia
Việt NamTiếng ViệtVietnamese日本日本語Japanese中国中文Chinese
South America
BrasilPortuguêsPortuguese
NewsfeedBreaking
09:38 GMTEndangered Siberian Tiger Killed in Russia's Primorsky Territory
09:36 GMTNYT: Israel Was Behind Cyber Attack on Iran's Fuel System in October
09:34 GMTOver 60 People Remain Hospitalised After Mine Accident in Southwest Siberia
09:16 GMTGerman Police Thwart Illegal COVID-19 Vaccination Campaign
09:06 GMTNew Social Ad on Domestic Violence Showing 'Bruised Kate Middleton' Causes Stir Online
08:37 GMTStowaway From Guatemala Hiding in American Airlines Plane's Landing Gear Found Unharmed - Video
08:20 GMTUK May Announce NHS Reshuffle to Tackle Omicron Variant, Sajid Javid Says
08:17 GMTUNRWA Funds Are Depleting and Palestinian Refugees Already Feel the Burden
08:05 GMT'Ronaldo's Only Ambition is to Retire With More Ballon d'Or Trophies Than Messi', Claims Award Chief
07:24 GMTDanger Zone: Tom Cruise Hangs From Wing of Flipping Plane for New Mission: Impossible Movie - Photos
06:56 GMTItalian Police Raid Juventus Offices as Part of Probe Into Player Transfers
06:37 GMTBJP MP Gautam Gambhir Receives Third Death Threat After Similar Messages From 'Daesh Kashmir'
06:06 GMTQueen Elizabeth II Picks Up Her 'MI6 Anti-Hacker Encrypted' Phone 'for Two People Only'
06:01 GMTFukushima Plant's Operator Starts Surveys to Prepare for Wastewater Dump, Reports Say
05:52 GMT'All Mouth and No Trousers': Boris Johnson 'Fed Up' With Priti Patel Over Migrant Channel Crossings
05:35 GMTFood Prices in Israel Much Higher Than in EU, Here's Why
04:46 GMTCOVID-19 Live Updates: Israel Closes Borders for Two Weeks Over Omicron Strain Fears
03:42 GMTHis Life, His Rules: Biden Spotted With Mask Down on His Chin While Inside Shop
03:28 GMTSouth Africa Laments Travel Restrictions, Calling Them ‘Punishment’ For ‘Excellent Science’
02:57 GMTGhislaine Maxwell Ready to Take Stand at Trial to 'Save Her Own Life' - Report