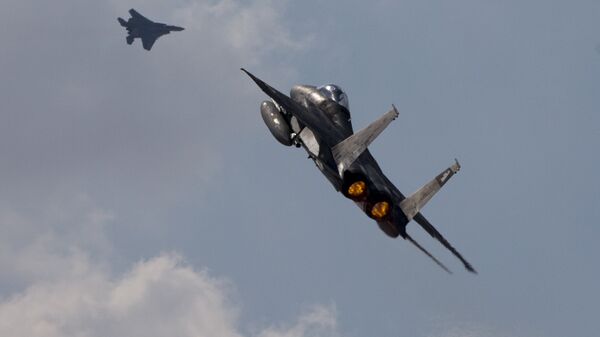 The situation along the Israel-Gaza border remains agitated by the ongoing mass protests of about 15,000 Palestinians against the US Embassy's relocation to Jerusalem.

"Every country has an obligation to defend its borders," Netanyahu stated on Twitter. "The Hamas terrorist organization declares it intends to destroy Israel and sends thousands to breach the border fence in order to achieve this goal. We will continue to act with determination to protect our sovereignty and citizens."

The comment was made in wake of the Israeli Air Force strikes on Hamas facilities earlier in the day.

"A fighter jet struck five terrorist targets in a military training facility belonging to the Hamas terror organization in the northern Gaza Strip," a military statement said. "The strike was conducted in response to the violent acts of the last few hours being carried out by Hamas along the security fence."

Previously, the IDF stated that a warplane and a tank hit other Hamas military positions after Hamas gunmen allegedly fired at Israeli forces.

Israel to Close Border Crossing With Gaza Strip - Reports
At least 37 Palestinians were killed by Israeli fire during clashes between protesters and Israel's security forces on May 14.

Palestinians have been holding mass protests along the border since March 30, known as the Great March of Return. During these protests, dozens of Palestinians have been killed, and over 1,000 others have been injured as the Israeli forces continue to suppress the demonstrations. The Palestinians intend to go on with the march until tomorrow, when they commemorate the 70th anniversary of their displacement.