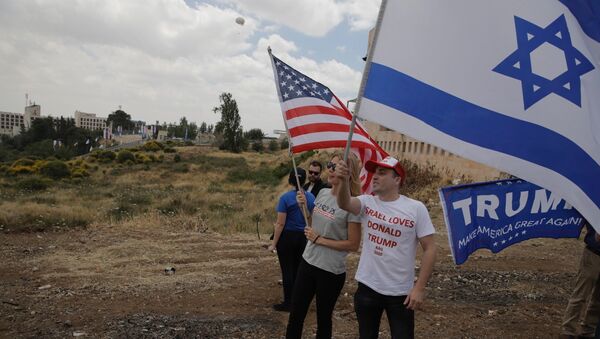 PARIS (Sputnik) - France does not approve of the US decision to move the country's embassy in Israel from Tel Aviv to Jerusalem, considers as it violates the international law, French Foreign Minister Jean-Yves Le Drian said.

"France does not approve of the US decision to move the US Embassy in Israel from Tel Aviv to Jerusalem, as the President of the Republic [Emmanuel Macron] has repeatedly stated. This decision violates international law, in particular, the resolutions of the UN Security Council and the UN General Assembly" Le Drian said in a statement.

The United States officially opened its embassy in Jerusalem earlier in the day.

"As tensions on the ground are lively, which grave incidents that have happened this past week in the Gaza strip are witness to, France is calling on the (international) community to take responsibility in a bid to prevent a new aggravation. After several weeks of violence and facing numerous victims among Palestinians in the Gaza strip, France is calling again upon the Israeli authorities to exercise restraint when it comes to the use of force which must be strictly proportionate," the statement continued.

According to Jean-Yves Le Drian, international law has "no ambiguity when it comes to the status of Jerusalem."

"It must be decided upon in a negotiation, as a set of parameters agreed upon by the international community, in a bid to come to a just and durable solution for two states living side by side in peace and security, both having Jerusalem as capital. This is what the law says and it is the essence of our peace efforts in the Middle East," the statement said.

Clashes Erupt as Palestinians Rally Against US Embassy Move in Jerusalem (VIDEO)
The US had declared its embassy in Jerusalem open during a ceremony that had kicked off on May 14 with Israeli Prime Minister Benjamin Netanyahu calling Jerusalem the "eternal, undivided capital of Israel."

In December 2017, Donald Trump announced his decision to recognize Jerusalem as Israel's capital and instructed the US State Department to launch the process of moving the US Embassy from Tel Aviv to Jerusalem.

Israeli servicemen on Monday killed at least 43 Palestinians and injured over 1,600 on the border with the Gaza Strip during the ongoing protests known as the Great March of Return and riots against the opening of the US embassy in Jerusalem, local media reported.

"Dozens of Palestinians, including children, have been killed and hundreds injured from Israeli fire today, during ongoing mass protests near the Gaza fence. We expect all to act with utmost restraint to avoid further loss of life. Israel must respect the right to peaceful protest and the principle of proportionality in the use of force. Hamas and those leading the demonstrations in Gaza must ensure that they remain strictly non-violent and must not exploit them for other means," Mogherini said in a statement.

Mogherini noted that any further escalation of the situation would cause "further unspeakable sufferings to both peoples, and will make the perspective of peace and security even more remote."

"The EU remains firmly committed to continuing working with both parties and with its partners in the international community towards a resumption of meaningful negotiations aimed at a two-state solution, based on the 4 June 1967 lines and with Jerusalem as a capital of both," Mogherini added.

Since March 30, Palestinians have been holding the so-called Great March of Return, near the Gaza Strip border. The Palestinians intend to go on with the march until Tuesday when they will commemorate the 70th anniversary of the Palestinian exodus that occurred as a result of Israel's declaration of independence in 1948 — the so-called Nakba Day.