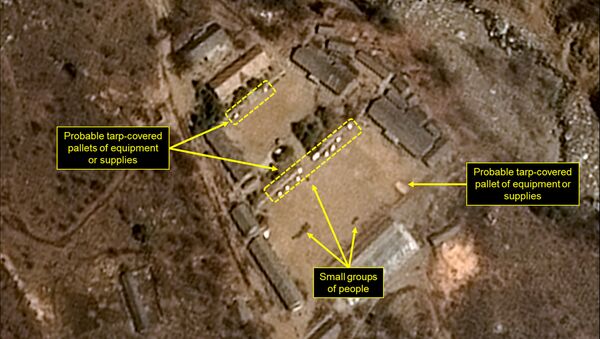 North Korea has announced that it intends to close the Punggye-ri nuclear polygon in the period from [May] 23 to 25. We welcome this,” the presidential office said in a statement. Pyongyang’s plans demonstrate the willingness to fulfill the promises made at the inter-Korean summit, the statement said.

S Korean President Dismisses US Troop Withdrawal After Peace Treaty With North
“The invitation of journalists from various countries also means that the dismantlement of nuclear site will be transparent for the international community,” the presidential office noted.

“North Korea has already deceived the world in 2008 with the cooling tower explosion show … The Punggye-ri nuclear test site shutdown show that they're planning to hold is nothing new," Hong said, as quoted by the Yonhap news agency.

On Saturday, the North Korean state media reported that the ruling party decided to dismantle the test site. The decision comes ahead of historic summit between US President Donald Trump and North Korean leader Kim Jong Un, slated for June 12. The US president has already welcomed North Korea’s plans to close Punggye-ri, calling it a “smart and gracious gesture.”

Trump Welcomes North Korea's Decision to Dismantle Nuclear Test Site
The North Korean leader announced the decommissioning of the Punggye-ri site during his summit with South Korean President Moon Jae-in in late April. In his announcement, Kim explained that Pyongyang’s pursuit for nuclear weapons was complete so the test site was no longer needed.