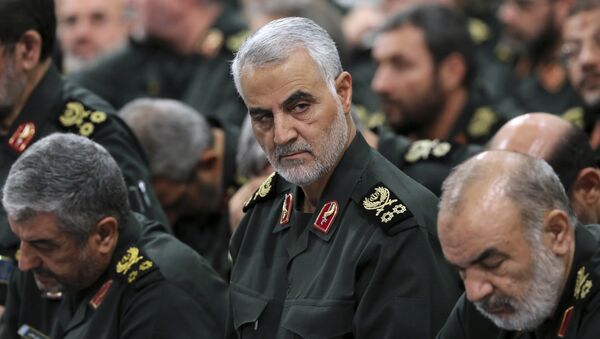 © AP Photo / Office of the Iranian Supreme Leader
Subscribe
The Kuwaiti newspaper Al-Jarida has reported recently that the US had allegedly given Israel the "Green Light" to eliminate General Qassem Soleimani, the commander of the Iranian Revolutionary Guard’s overseas arm,Quds force. The newspaper quoted a source as saying that Soleimani poses a "threat" to Washington and Tel Aviv in the region.

Sputnik spoke with political analyst and journalist Rohollah Faghihi for more insight into the issue.

Sputnik: Does this report, published in the Al-Jarida newspaper, sound trustworthy to you?

Rohollah Faghihi: This is not the first time that I have heard such reports. However, I have seen Iranian scientists assassinated by Israelis, which have been also reflected in a new book.

Sputnik: Who is General Quaseem Soleimani and how important is he?

It is believed that Gen Soleimani is the commander of Iran's regional presence, and many of Iranian victories in regional issues and influence in regional countries are due to his strategies. Unlike various reports, he is a moderate person in Iranian politics and has also refrained to enter politics. However, he has been offered to run for the presidential election, but he hasnt accepted.

Sputnik: Why did Israel decide to assassinate General Qaseem Soleimani?

Rohollah Faghihi: If this is ture, this is a miscalculation by Israeli administration as this will heighten the tensions between Iran and Israeli. And I believe the Israelis wouldn't commit such action under the current circumstances as they are well aware that Iran haven't left any attempts on his interests and influential figures unanswered.

I believe such actions will endanger the stability of the region and will lead to serious tensions between the two parties.

Sputnik: What threat does this general present to US and Israeli interests in the region?

Rohollah Faghihi: He has managed and succeeded to advance Iranian interests in countries such as Lebanon, Iraq and Syria. Israelis believe the recent missile answers by Syria to Israeli was directed by Gen Soleimani, who is called in Iran as Haj Qassem.

One of the issues that West and Arab countries have a serious issue with, is the regional presence of Iran which has been gained through Soleimani's strategie and his network of militia in these countries.

The views expressed in this article are solely those of Rohollah Faghihi and do not reflect those of Sputnik.

000000
Popular comments
If it was not for generals of this sort the occupier of Palestinian land would be all over the Middle East causing havoc, terror and death to civilian people. Long live General Soleimani and others of his courage and uncompromising sense of justice.
Robert Klimenko
13 May 2018, 08:39 GMT4
000000
For lasting peace three nations should be completely wiped out from the map of the globe- the US, Israel and Saudi Arabia. Or, there need to be general uprising in the US against the military industry lobby and, against the royal family in Saudi Arabia. Rest will fall into places.