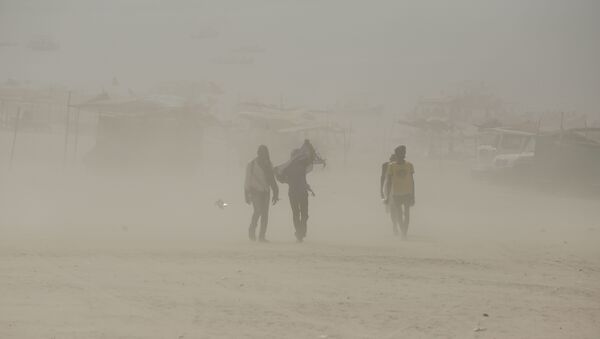 © REUTERS / Rajesh Kumar Singh
Subscribe
A powerful dust storm and rains have hit Delhi, grounding flights, uprooting trees and bringing traffic on the city's roads to a standstill, several days after an alert was issued over north India for a massive storm, New Deli TV reports.

The storm, which had wind speeds of up to 70 kilometers per hour (45 miles per hour), demolished dozens of homes and destroyed power lines in northern Uttar Pradesh state, a government official said.

At least 25 people have lost their lives and dozens more injured, according to the Times of India paper.

Chief Minister of West Bengal Mamata Banerjee said her government would grant assistance to the families of the departed, as well as to those whose houses have been damaged.

"We do not have control over nature. We will not be able to bring back those who have died, but our government will be beside these families and help them in every possible manner," she said.

People have been posting videos of the storm on Twitter.

More than 70 incoming flights were canceled from the Indira Gandhi International Airport (IGIA) and Lucknow Airport on Sunday, with people left at the airport without power.

Breaking News: Scenes from Lucknow airport in semi darkness as lights go off after #storm hits parts of North India. Passengers are told flights will be delayed or maybe cancelled. @GoNews24x7 has a reporter on the scene. Stay tuned. pic.twitter.com/bfaH6mgaqO

Earlier this month, a dust storm along with thunderstorms and rain caused destruction over five states, including Uttar Pradesh and Rajasthan, killing more than 150 people, eradicating trees and crushing houses.