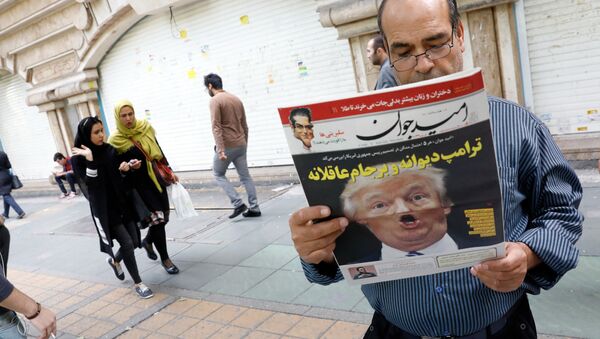 Turkish experts have shared with Sputnik their views on the mounting tensions between the United States and Israel and Iran, which followed President Donald Trump’s decision to withdraw from the Joint Comprehensive Plan of Action (JCPOA), also known as the nuclear deal.

Commenting on the recent developments, political scientists and international relations scholar Özdemir Akbal has said that the thaw in relations between the US and Iran during their fight against Daesh* has come to an end, as Washington, having secured its anti-Tehran allies’ support – Israel and Saudi Arabia – has turned to take decisive action against the Islamic Republic.

“The Iran nuclear deal has become one of the most criticized topics since US President Donald Trump took office. During their fight with terrorism, the United States, Russia and Iran reached a tacit agreement, having put a premium on the destruction of Daesh, which presented a real threat to each of them,” he told Sputnik.

According to the scholar, the relations between Washington and Tehran deteriorated after the threat from the terrorist group diminished and the West put Syrian President Bashar al-Assad’s ouster high on the agenda.

“As is known, the interests of the US’ traditional allies in the region – Israel and Saudi Arabia – are at odds with the plan to reinforce Assad’s power in Syria and to acknowledge Iran’s influence, which is showing an increasing political presence in the Mediterranean. In this context, the United States announced its decision to pull out from the Iran nuclear deal,” Akbal concluded.

Turkish military and strategic analyst Naim Babüroğlu, for his part, has stressed that Washington’s and Tel Aviv’s recent moves indicate that the two have de facto started a war against Iran.

“Trump has recently described Iran as a country that is assisting terrorists; hence, the United States has de facto started a war against Iran. The US aims at triggering social upheavals within Iran with the use of economic sanctions and restrictions in other fields. In other words, Washington will try to weaken Iran from within,” the analyst emphasized.

Babüroğlu proceeded to say that the tensions between Israel, the US and Iran would affect Turkey, which maintains close ties with Tehran on a wide range of matters in the regions.

“Undoubtedly, in this context Turkey should stand by Iraq, Iran, Syria and Russia, thus Ankara would be able to alleviate or even eliminate the threat. Otherwise, this situation can negatively affect the peace process in Syria, the Astana talks and the state of affairs in the region on the whole,” he concluded.

Earlier this week, President Trump announced his decision to withdraw from the JCPOA, reached in 2015 by Iran, the five permanent members of the UN Security Council, Germany and the EU, promising to reinstate anti-Tehran sanctions. Israeli Prime Minister Benjamin Netanyahu welcomed the US president’s “brave decision to reject the catastrophic nuclear deal with the terrorist regime in Tehran.”