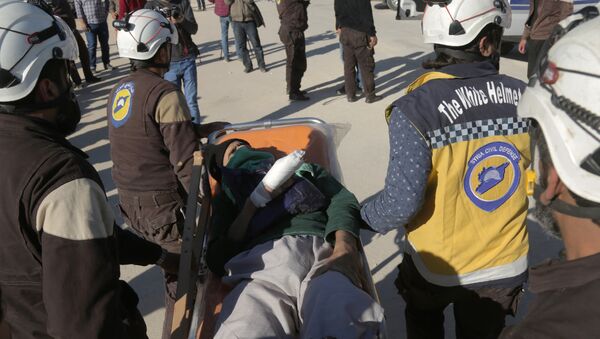 British Prime Minister Theresa May said that London may increase its support to the White Helmets Organization operating in Syria. Her comments come after the US has decided to freeze its funding of the organization. Radio Sputnik discussed the issue with Maram Susli, Syrian activist and political commentator.

Sputnik: In your view, why is Theresa May supporting the White Helmets despite the controversial information that exists about the group, and this obviously comes on the back of the White House commenting to say that they will no longer further fund the organization?

Maram Susli: Well, I believe the UK government knows very well that the White Helmets are linked to armed extremist groups in Syria including Al-Qaeda. In fact, the purpose of the White Helmets is to provide the UK and other governments with means with which they can fund these armed groups while having plausible reliabilities. Now, they pretend they are giving money to this NGO, that's helping people, but in fact it's the way to fund the so-called Syrian rebels without having people continuously question whether that funding will eventually get to Al-Qaeda, which, obviously, it has and it's shown that.

The other part of it is that these groups provide the casus belli for wars that the UK and other governments in NATO, including the United States, need to get into Syria and fight the Syrian government and military. That is they set up this chemical weapons attack that we keep seeing for the last few years.

Sputnik: Do you actually believe that Theresa May will likely get the support from her other MPs to approve additional funding?

Maram Susli: Unfortunately, yes. The PR of this group is very powerful. […] Even [British Labour Party politician], Matthew Pennycook, who is actually right under Jeremy Corbyn, he is the one that suggested that the UK office funds the White Helmets, to which Theresa May agreed. So, they basically have agreement across the boards, amongst all parties. This push for the White Helmets is probably coming from something more powerful that even these politicians that we've seen in the UK. Probably, it's something that is coming from the UK military and the deep state in the UK that is pushing for these White Helmets groups.