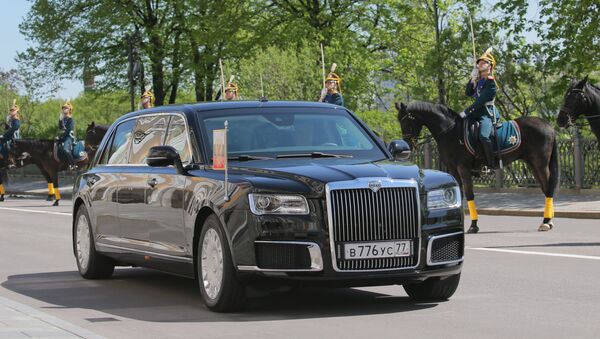 © Photo : Press-service of the Russian President
/
Go to the photo bank
Subscribe

Although the NAMI State Research Center, which is working on the "Unified Modular Platform," also known as the Kortezh, has fed the public with numerous images and concept art of the presidential limo, very little information has been provided about what's inside the new car or its other existing variations (such as sedan and offroader versions). But the Russian Car Industry News group on the VK social network has recently published the first photos and concept images of the new presidential sedan called "Aurus Senat" (also part of Kortezh family).

As can be seen, the car has a digital dashboard; the interior is decorated with wood and plonge lambskin and the floor is covered with a fiber bound carpet. The sedan's audio system reportedly won't support either Apple CarPlay or Android Auto due to security concerns.

The Kortezh car family was created with the intent to be presented to the open market under the brand "Aurus" as high-end vehicles in three different classes: Senat, Arsenal and Kommendant. Civilian versions will be supplied without additional security features.

Putin's new ride is the first domestically produced vehicle design for a Russian head of state since 1985, when Soviet leader Mikhail Gorbachev was provided with the Zil-41052, an updated version of the Zil-4104 design created in the late 1970s.

Russian President Boris Yeltsin continued to use the Zil-41052 until 1995, when he switched to an armored Mercedes S-Class, which was preferred to developing a new Zil version due to fears over high development costs. Presidents Putin and Medvedev continued to use the German luxury vehicles until the idea to create a Russian-made limo for presidential needs surfaced again in 2012.