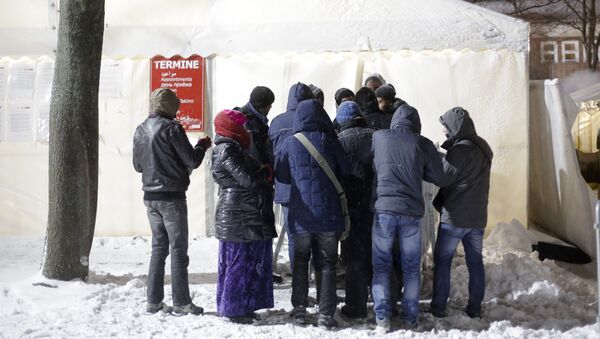 © AP Photo / Markus Schreiber
Subscribe
Germany's family reunification program has sparked harsh criticism from Bundestag members. Berlin has proposed assisting refugees, including those with ties to hardcore Islamist groups, with bringing their families to Germany. Sputnik spoke with a Bundestag member of the Alternative for Germany (AfD) party for insight into the issue.

Sputnik: How dangerous is this family reunification program?

Markus Frohnmaier: Because of the family unification program Hundreds of thousands of migrants have already entered Germany in this way in recent years.

For asylum seekers and recognized refugees under the Geneva Conventions, there are already no restrictions. Family reunification is very dangerous for Germany because it aggravates all the problems associated with illegal mass immigration and the failed ideology of culturalmarxist multiculturalism.

Sputnik: What impact can this have on German society?

Markus Frohnmaier: For a long time we have been experiencing an erosion process of internal security in Germany. Because of the family unification program this development will continue to accelerate. The consolidation of Islamist parallel societies will also be the result of a family reunification policy pursued by the Federal Government. Each recognized asylum seeker is followed by one to four family members.

The majority of these people will live permanently with social security benefits. We the Alternative für Deutschland reject any family reunification for refugees, because the German social systems cannot bear these burdens.

Sputnik: According to the reports, exceptions will be granted for individuals who have previously been under suspicion. Were any safety precautions proposed for the public?

Markus Frohnmaier: The duty of the Federal Government would be to ensure, in the interest of public security, that perpetrators, Islam extremists and potential terrorists leave the country as quickly as possible. Instead, the Federal Government wants to make it easier for such people to settle permanently in our country by catching up with their families.

Those who fought abroad for a hostile power, the Daesh, should be expatriated and expelled if possible and not rewarded with family reunification. Anyone who initiates and approves such decisions damages the country and jeopardizes the security of its citizens.

Sputnik: Angela Merkel's decision earlier to accept 10,000 refugees was met with criticism even within the conservatives. How can this move impact the strained relations of sister parties?

Markus Frohnmaier: No, the tense relationship of the so-called conservative sister parties is pure theater and de facto electoral deception. Due to the regional election taking place in Bavaria this year, Angela Merkel's regional sister party, the CSU, fears losing its power.

The past has shown that both sister parties support Merkel's policy of illegal border opening and rescue of the euro, contrary to the European treaties. Everything else is just fog candles.

The views and opinions expressed by Markus Frohnmaier are those of the speaker and do not necessarily reflect those of Sputnik.

000000
Popular comments
The EU is busy making a new home for their defeated muslim brotherhood terrorist army. While they make room by incarcerating the citizens of Germany especially elderly citizens for thought violations.
SPF
12 May 2018, 07:07 GMT
000000
maybe germany has finally figured out a way to defeat europe once and for all? Seriously though, where do these 'ideas' come from? Has a generation or two been brainwashed with shame for the events of the 30's and 40's and forgotten that a nation needs also to be secure within their own borders?
michael
12 May 2018, 07:48 GMT
000000
Newsfeed
0
New firstOld first
loader
LIVE
Заголовок открываемого материала
Access to the chat has been blocked for violating the rules . You will be able to participate again through:∞. If you do not agree with the blocking, please use the feedback form
The discussion is closed. You can participate in the discussion within 24 hours after the publication of the article.
To participate in the discussion
log in or register
loader
Chats
Заголовок открываемого материала
Worldwide
InternationalEnglishEnglishMundoEspañolSpanish
Europe
DeutschlandDeutschGermanFranceFrançaisFrenchΕλλάδαΕλληνικάGreekItaliaItalianoItalianČeská republikaČeštinaCzechPolskaPolskiPolishСрбиjаСрпскиSerbianLatvijaLatviešuLatvianLietuvaLietuviųLithuanianMoldovaMoldoveneascăMoldavianБеларусьБеларускiBelarusian
Transcaucasia
ԱրմենիաՀայերենArmenianАҧсныАҧсышәалаAbkhazХуссар ИрыстонИронауОssetianსაქართველოქართულიGeorgianAzərbaycanАzərbaycancaAzerbaijani
Middle East
Sputnik عربيArabicArabicTürkiyeTürkçeTurkishSputnik ایرانPersianPersianSputnik افغانستانDariDari
Central Asia
ҚазақстанҚазақ тіліKazakhКыргызстанКыргызчаKyrgyzOʻzbekistonЎзбекчаUzbekТоҷикистонТоҷикӣTajik
East & Southeast Asia
Việt NamTiếng ViệtVietnamese日本日本語Japanese中国中文Chinese
South America
BrasilPortuguêsPortuguese
NewsfeedBreaking
11:07 GMTDeath Toll From Kandahar Mosque Bombing Rises to 63
11:02 GMTFrench Politician: US Has Moral and Legal Obligation to Unblock Afghan Assets & Let the Nation Be
10:59 GMT‘Killed Serving the People’: UK Media Shows Rare Display of Cross-Party Unity in Tribute to Dead MP
10:50 GMTIs Russia in Danger of Running Out of Gold Deposits?
09:08 GMTUS-Greek Bases Pact Signals Bid to Pressure Turkey, Dominate East Mediterranean
09:02 GMTAustrians Invited to Presidential Palace for COVID-19 Shots
09:00 GMTNASA's Lucy Mission Blasts Off to Examine Trojan Asteroids
09:00 GMTPremier League: Five Biggest Games of Matchweek Eight
08:55 GMTUK Police Ordered to Immediately Review MPs' Security Arrangements After Fatal David Amess Stabbing
08:30 GMTSeveral Dead and Dozens Injured: What Was Behind Thursday's Bloody Events in Lebanon?
07:33 GMTISS Crew Was Woken Up by Siren at Night
07:16 GMTAnother Day, Another Blunder: Psaki to ‘Choose Words More Carefully’ After Ethics Watchdog Complaint
07:12 GMTNetflix Fires Organiser of Trans Employee Walkout for Leaking Internal Documents, Reports Say
06:08 GMTFour Indian Paramilitary Personnel Injured in Blast at Raipur Railway Station
05:59 GMTBiden Admits He Will Have to 'Build Back Better' With Less, Is ‘Not Going to Get $3.5 Trillion’
05:45 GMT‘Sensational’ Remains Buried by Ancient Vesuvius Eruption Discovered at Herculaneum
04:34 GMTJapan Prime Minister Wants to Include Possible Attack on Enemy Bases in Security Strategy
04:31 GMTMagnitude 5.5 Earthquake Registered Near Southern Kuril Islands, Seismologists Report
04:30 GMTWatch Shark Biting Alligator as It Floats Near Dock Enjoying Sunny Day
04:09 GMTUS Commits to Condolence Payments for Family of 10 Civilians Killed in Botched Kabul Drone Strike