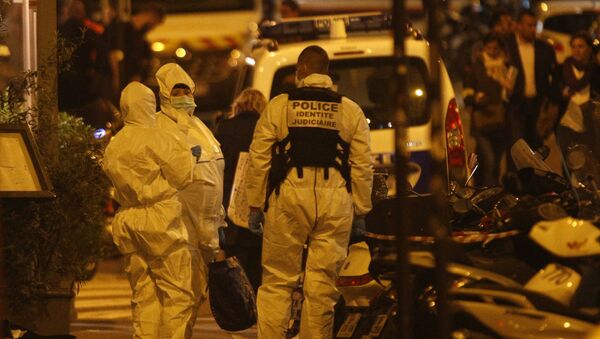 While Paris prosecutor's office said that the man was shouting "Allahu Akbar", Daesh has reportedly claimed responsibility for the stabbing attack.

According to BFM TV, an unidentified person attacked bystanders with a knife in the center of Paris on Saturday. One person died and four were injured in the attack, with two of the wounded being in serious condition.

Paris Authorities said that perpetrator was shortly overpowered by police. Sources close to the incident said that the assailant was shot dead by local police, BFM TV reported.

According to media reports, the Paris attacker allegedly yelled "Allah Akbar" just before the attack. Some witnesses have asserted to French journalists that the assailant may have had some ideological motive, however, police have yet to confirm the information.

"The assailant with a knife was screaming 'Allah Akbar' … The prosecutor’s office on counterterrorism has launched an investigation," Prosecutor of the French capital Francois Molins said on Sunday at a press conference, aired by the BFM TV broadcaster.

Just hours after the attack, media reported that Daesh had claimed responsibility for the deadly assault.

The French authorities have yet to identify the man, who has attacked passers-by in central Paris, country’s Prime Minister Edouard Philippe said on Sunday. "Currently his identity is yet to be established,” Philippe said, as quoted by the BFMTV broadcaster.

The official went on to commend the police for a prompt reaction to the attack and expressed condolences to those affected by the incident.

French Interior Minister Gerard Collomb has praised the police for their fast response.

"I applaud the composure and fast reaction of the police forces that neutralized the attacker. My thoughts are with the victims of this outrageous act," Collomb said on Twitter.

The tragic incident reportedly took place not far from the Opera, in the ninth arrondissement of Paris. This area is full of bars, restaurants and theaters which were brimming on a weekend night.

In addition, French President Emmanuel Macron has expressed condolences to the family of the victim as well as to the people injured in the attack.

Mayor of Paris Anne Hidalgo has also expressed condolences to the family of the victim, who was killed in a knife attack in the center of the French capital as well as to all people injured in the attack.

"Today our city was hit with a deadly attack. My thoughts are with the family of the victim. I am also thinking about those injured and their families. I want to say that all Parisians are on their side," Hidalgo wrote on Twitter.

According to French media reports, a string of jihadist attacks have killed over 245 people in France over the past three years.