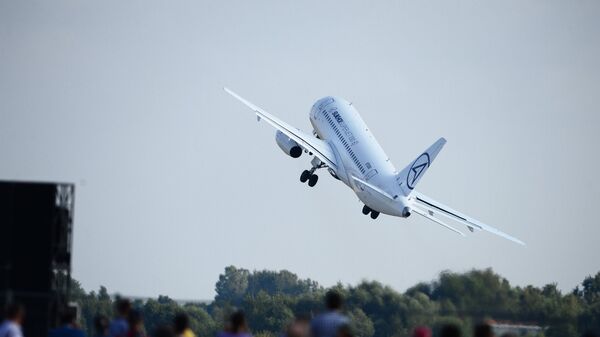 © Sputnik / Mikhail Voskresenskiy
/
Go to the mediabank
Subscribe
International
India
Africa
MOSCOW (Sputnik) - Russia's Sukhoi Civil Aircraft said it would continue to cooperate with Iranian airlines in the framework of interim agreements on the delivery of SSJ100R passenger aircraft, despite the resumption of US sanctions on Iran.

"The Sukhoi Civil Aircraft will continue to work with Iranian airlines under the preliminary agreements signed at the Eurasia Air Show in April 2018. According to the agreements, the parties are studying in detail the possibility of supplying an updated version of the aircraft — SSJ100R, which is implemented under the program of import substitution of the SSJ100 components," the company's press service said.

According to Sukhoi Civil Aircraft President Alexander Rubtsov, the SSJ100R modification will be built without US-made components to avoid contract obstacles posed by potential US sanctions.

Top 6 Premieres at the 2018 Moscow Victory Day Parade to Watch Out For
The Russian company has recently signed memorandums of understanding on deliveries of 40 Sukhoi SSJ100R passenger planes to two Iranian airlines until 2022.

Despite concerns about the US withdrawal from the Iran nuclear deal, which will probably lead to the loss of upwards of $40 billion in contracts for Boeing and Airbus, Russian airplane manufacturers have a historic opportunity to gain a new foreign market for its latest designs.

Besides announcing the withdrawal from the Iran Nuclear Deal earlier this week, US President Donald Trump promised to reinstate the sanctions against Iran, which were lifted as part of the agreement.