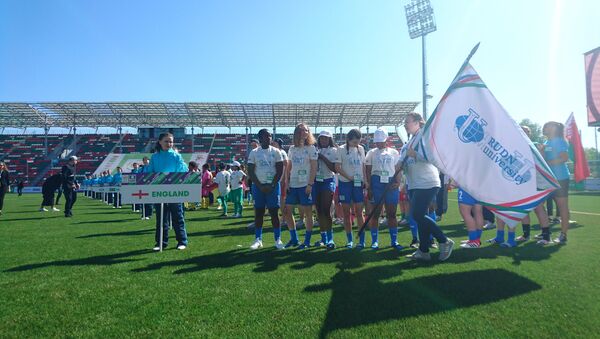 Denis Bolotsky
All materialsWrite to the author
“The future depends on you” is the slogan of the football tournament for street-connected and orphaned children that kicked off in Moscow Friday. Amateur players from 21 countries, including girls’ football teams, will get the ball rolling, and, in their spare time, get to see the Kremlin and Red Square.

For years, Moscow's Sapsan Arena hosted only local football games. Now, for five days, it will become home to amateur players from all over the world.

Most young Team Brazil members have never been to Russia before. So when they saw a pile of snow on the sidewalk (very rare even for Moscow during this time of year) — they rushed to take selfies in front of it.

Team India is represented by girls from the Karunalaya Centre for street and working children. They all come from Chennai — a city with population of over 7 million, which has many problems when it comes to poverty and homelessness. The center's founder, Dr. N. Paul Sunder Singh, spent years helping Chennai's poorest families, and bringing Indian kids to play football in Russia is just one of his recent initiatives.

N.Paul Sunder Singh, Team India — to @SputnikInt: “We’s so excited to be here. This is the city, which is going to host the FIFA World Cup, and street children are going to play their own World Cup in Moscow” pic.twitter.com/HF9ajktn4u

​The US, where football is becoming increasingly popular, is represented by a girls' team from Washington, DC. One of the American players, Kalkidan Haile, told Sputnik that learning to play football has always been an important personal goal for her.

"It was a big part of my life, and I wanted to break that barrier — that girls can't play soccer. And I proved them wrong."

Darla Bardine from the USA National Network for Youth, who brought the American team to Moscow, says that the tournament helps remind the world that there are those who are homeless and struggling. For the young players themselves the event is an opportunity to get to know people from other parts of the world.

"It's important for people to build human connection, to get to know folks from other countries and connect as human beings," she told Sputnik.

Empowering street-connected kids and helping them transform their lives through sports is one of the key goals for Street Child United, a UK charity, which, together with Save the Children and Russian cellular provider Megafon, took part in organizing this year's tournament.

Similar events were held by Street Child United in South Africa in 2010 and in Brazil in 2014. Some of the tournament's alumni, like Sadock John from Tanzania, are proudly sharing their success stories with others. The young man scored the first and the second goals when he played for his home team during the first Street Child United games. Now he's in college, majoring in community management and hoping to inspire other kids with his story.

Sadock John: It’s difficult for the child to get out of the streets.But once they have someone who supports them, somebody they can talk to them,they can change that,and they can be very good examples for other kids in the streets. https://t.co/cayeSnvg8u

​On Friday, the Brazilian girls who won the 2014 Street Child United Cup in their home city of Rio de Janeiro will play a friendly match against Russia. The tournament, which is free for everyone to attend, will conclude May 16.