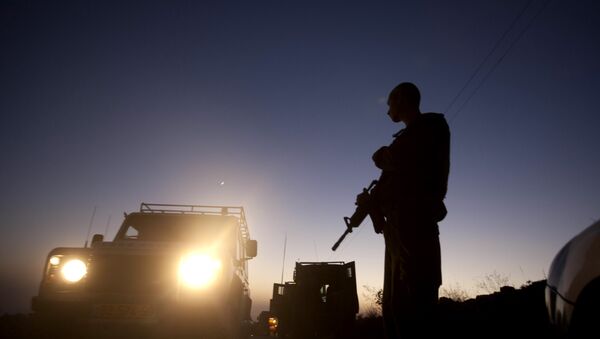 According to reports, a vehicle has fled the scene after hitting a soldier at a security checkpoint near the Shavei Shomron settlement. Security forces have launched a search for the driver.

An Israeli soldier has been lightly wounded in a car-ramming attack in the West Bank and has been evacuated from the scene, according to the Israel Defense Forces.

Paramedics arrived at the scene and, along with IDF medics, provided treatment to the 20-year-old, who had suffered light bruises to his limbs.

A short while ago, a car ramming attack targeting an IDF soldier took place at the Ganot Interchange near Shavei Shomron west of Nablus. The soldier was lightly injured & evacuated from the scene.The assailant escaped & forces are searching

​The IDF spokesperson’s unit confirmed reports that an attempt had been made to run over an Israeli soldier standing at a security checkpoint near the settlement.

Stop 'Hunting': Palestine Urges UN to Respond to Killing of Protesters by Israel
With the US moving its embassy to Jerusalem, tensions between Palestine and Israel have started to rise, with riots and accidents taking place throughout the West Bank.

Trump's unilateral decision thrilled Israelis and infuriated Palestinians, who have viewed the decision as ignoring their interests. The Palestinians want to make the eastern part of the city the capital of their future state.

Since March 30, Palestinians have been holding mass rallies near the Gaza Strip border, known as the Great March of Return. Since then, dozens of Palestinians have been killed, and over 1,000 others have been injured, as the Israeli forces have been suppressing the demonstrations. The protesters intend to go on with the march until May 15, when they will commemorate the 70th anniversary of the displacement.