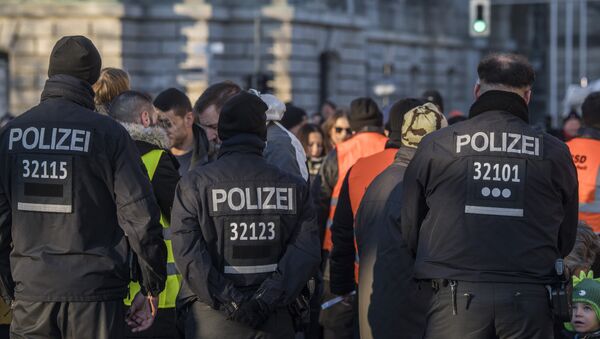 © AFP 2021 / John MACDOUGALL
Subscribe
Activists believe that the proposed changes to the law will give police almost unlimited powers and allow them to intervene before a crime has even been committed. Among other things, the law gives police enhanced powers when it comes to surveillance.

Bavaria's conservatives are advocating amendments to the federal state's Police Tasks Bill (PAG), a move that prompted some 30,000 protesters take to streets in Munich to protest the initiative on Thursday.

Activists, who call their movement "noPAG," explained that the main goal of their campaign was to prevent what they perceive as a "massive attack" on democracy and human rights.

"We're demonstrating loud but peacefully," Simon Strohmenger of the noPAG movement was quoted by Deutsche Welle as saying.

Participants of one of the largest demonstrations in Munich over the last few years are calling on the Bavarian authorities to abandon their controversial legislative proposal.

Critics believe that the law will grant Bavarian police almost unlimited powers and enable them to detain people without trial and intervene even before a crime has been committed.

Protesters also argued that law-enforcement services will use means such as online surveillance, postal crackdown and genetic testing, turning Bavaria into surveillance state.

For its part, the Bavarian CSU party has stated that the changes are only designed to implement the EU's new data privacy directive and help police to identify suspected terrorists more efficiently.

The proposed changes to the bill are expected to be passed on May 15.