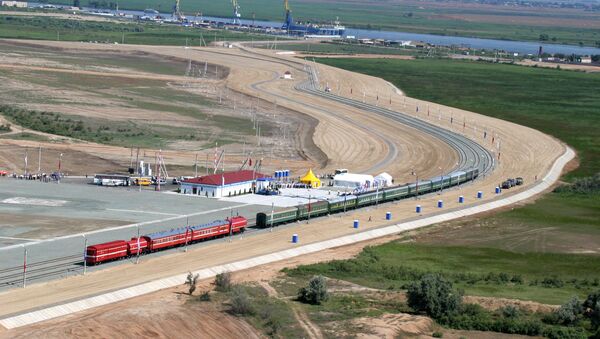 © Sputnik / Sergey Subbotin
/
Go to the photo bank
Subscribe
Beijing has officially opened its new train route to Iran, as the US urges its companies to wind down their operations with the Islamic Republic.

As US President Donald Trump hardens his confrontational attitude to Tehran, tearing up the 2015 nuclear deal and calling for a new sanctions regime, China is more than ready to grab the opportunity for trade by opening a new international railroad connecting Tehran and Bayannur, a city in China's Inner Mongolia region.

The exact route of the railroad is yet to be disclosed, as there are currently several major railroad projects, some of them even including China's biggest regional rival, India. But, considering Bayannur is located near the northern border of China and there's already an international railroad to Kazakhstan there, it is likely that the new trade route goes through the territories of former Soviet republics Kazakhstan, Uzbekistan and Turkmenistan.

Compared with ocean shipping, the train route shortens the delivery time by some 20 days, and Chinese sunflower seeds are now expected to get to Tehran in two weeks — less than half as long as before.

The news comes at a time when an all-out military conflict between Iran is Israel is looming. In this light, Washington's call for companies to stop doing business with Iran might be perceived as a precaution in light of a coming war. If so, then China would seem to be taking Iran's side with its trade projects.

Or, Trump's call might just be just another attempt to entice US companies home. With Trump, you never know.

"We will continue with our normal and transparent practical cooperation with Iran on the basis of not violating our international obligations," he said.

According to the Washington Post, Iran sells more to China than to any other country and celebrated a 25 percent increase in exports there last year. The value of Chinese exports to Iran also increased by more than 21 percent last year, according to Islamic Republic of Iran Customs Administration's statistics.