Brazilian Police Under Pressure to Catch Killer of Campaigning Politician 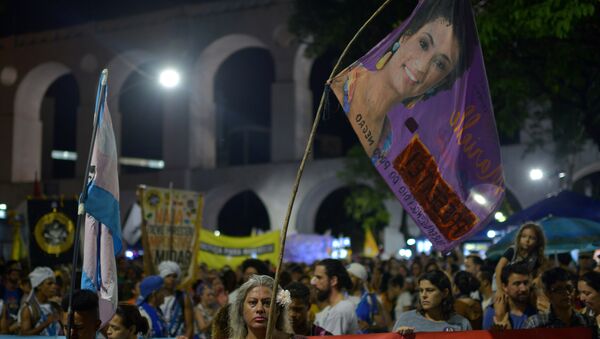 © REUTERS
Subscribe
A city councillor in Rio de Janeiro has denied any involvement in the assassination of campaigning politician Marielle Franco, who was gunned down in March. Franco was a black lesbian who believed paramilitary groups were targeting people in impoverished neighborhoods for extra-judicial killings.

On Thursday, May 10, Public Security Secretary Raul Jungian said councillor Marcello Siciliano was being investigated, along with a police officer and a former officer and militia boss.

The day before Councillor Siciliano denied claims in the O Globo newspaper that he had any role in the assassination of Franco, who was killed on March 14.

Siciliano is a member of the centrist PHS (Humanist Party of Solidarity) — one of 22 political parties in Brazil — while Franco was from the left-wing PSOL (Socialism and Liberty Party).

O Globo claimed a witness had testified to the police that Siciliano met with Orlando Oliveira de Araújo, a former police officer and now the leader of a vigilante militia group, to discuss rubbing out Franco, who had been asking awkward questions about a series of killings.

The witness, who has not been named, is reportedly a former member of the vigilante militia, which was hired by businesses to tackle criminals.

On Thursday, May 10, police re-enacted the shooting of Franco and her driver Anderson Pedro Gomes on the same street where she was killed.

"It's important to have the movement of the vehicles and sounds. We can also see if the shooter was skilled or not, if there was a burst of shots or if they were intermittent,"  Detective Giniton Lages told the Associated Press.

Franco, 38, was elected in 2016 and spoke up for people living in some of the poorest and most marginalized shantytowns, or favelas.

Just days before she was killed, Franco had discussed on social media what she claimed were extra-judicial killings by the police.

"There is huge concern that two months after the killing of Marielle Franco there are no answers from authorities," Renata Neder, research coordinator for Amnesty International Brazil, told AP.

Politics, like many other walks of life in Brazil, tends to be dominated by lighter skinned Brazilians and those with darker complexions tend to be at the bottom of the heap both politically and economically.

Two months after the killing of Marielle Franco there are no answers from authorities. Her death represents struggle for equality where more than 50% of people identify as black or mixed race yet most politicians are white. #mariellevive @AmnestyUK_LGBTI https://t.co/NFhjYdKm0K

Franco was not just black, but was also from the LGBT community, and lived with her partner Mônica Benício. The couple were planning to get married next year.

Brazil has been in a state of uproar for several years, since corruption allegations centred around the Lava Jato (Car Wash) scandal emerged, dragging down first President Dilma Rousseff and then former President Lula.

In May 2016 Rousseff was impeached and finally ousted, to be replaced by her right-wing Vice President, Michel Temer.

Our very own Director of Education, Adjoa Florência Jones de Almeida nominates Brazilian councilwoman Marielle Franco, who recently lost her life due to her fearless activism, as well as her daughter Zena. Who is a radical woman in your life? #radicalwomenbkm pic.twitter.com/aVyg231aVy

Later this year the Brazilian electorate will choose a new President and few give Temer any chance of getting the job.

Among those set to challenge him are Jair Bolsonaro, a former Brazilian Army officer who has a populist agenda and five million followers on Facebook.

He has been dubbed the "Trump of the tropics" but he has enraged liberals with his praise of the military government which ran the country, with widespread human rights abuses, in the 1970s.

Brazil has more homicides than any other country in the world — in 2016 the Brazilian thinktank Igarape said there had been 57,395 deaths.

Less than one in 10 are ever solved but after huge demonstrations in downtown Rio with protesters demanding justice for Marielle, there is a feeling her killers might just get their day in court.