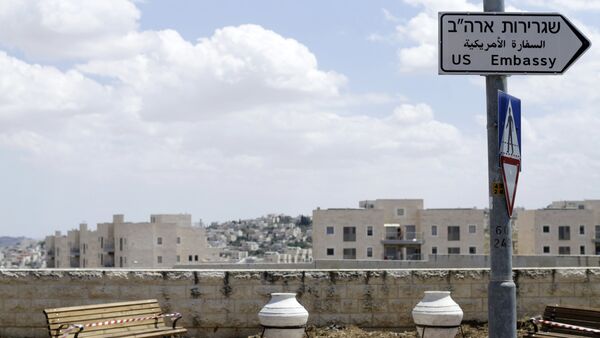 © Sputnik / Amit Shaal
/
Go to the photo bank
Subscribe
On December 6, 2017, US President Donald Trump announced that he was formally recognizing Jerusalem as the capital of Israel and moving the embassy from Tel Aviv.

The US embassy in Israel has changed its Twitter name from USEmbassyTelAviv to USEmbassyJerusalem to reflect the upcoming move next week.

The embassy posted a video clip of the changes being made to its official account with a message saying it was “still looking for a suitable header photo.”

On May 14 the official opening ceremony for the relocated embassy, which will move from Tel Aviv to Jerusalem, will take place.

The building, which is currently a US consular space, is small in size and it will at first occupy part of the consular workstation while the planning and construction of a new embassy building is underway, according to the US State Department.

Some people expressed excitement over the news on Twitter.

While many others were unhappy about the relocation of the embassy.

​Trump’s unilateral decision thrilled Israelis and infuriated Palestinians, who saw the decision as ignoring their interests. The Palestinians want to make the eastern part of the city the capital of their future state. Jerusalem was captured by Israel in the 1967 war.

Nearly all countries maintain their embassies in Tel Aviv.

Since Trump's announcement, Guatemala and Paraguay have announced that they too would like to move their embassies to Jerusalem.