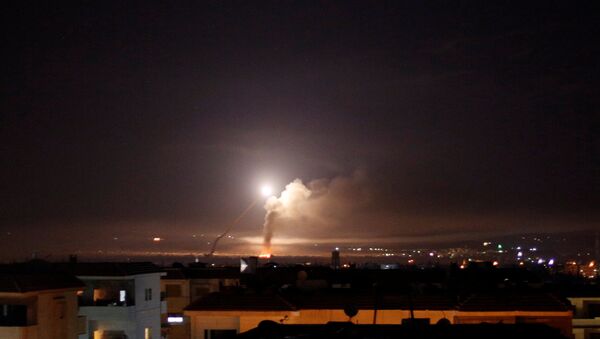 Israel's Defense Ministry has claimed that its forces have struck “nearly all Iranian infrastructure in Syria” during strikes on May 10, conducted in retaliation for rockets fired at the occupied Golan Heights. Sputnik discussed the issue with Professor Meir Litvak - director of the Alliance Center for Iranian Studies at Tel Aviv University.

Sputnik: Following President Trump's withdrawal from the nuclear deal, tensions between Israel and Iran escalated to a new height. Does this come as a surprise to you?

Meir Litvak: Unfortunately, this doesn't come as a surprise, but I think that the two issues are not totally related. The tension between Iran and Israel has been building up in Syria in recent months following the consolidation of the Iranian presence in Syria, including the statements by various pro-Iranian militias that they want to confront Israel. And then Israeli fears of an Iranian military presence in Syria and Israeli attempts to prevent such a consolidation of Iran in Syria and therefore we had some clashes in the past.

In February there was unmanned airplane shot down by Israel, an Israeli plane was shot down in Syria. So we had this tension being built up in recent months. Now we have a new height and I'm not sure it is a result of the nuclear issue, which is a very important issue, but a separate one from this.

Sputnik: Professor, why is Israel so concerned with Iran's increased presence in Syria?

Meir Litvak: Israel concerned because Iranian leaders announced almost on a weekly basis their desire that Israel should be eliminated as a state. Iran also pledged to support all organizations that fight Israel. And it said that it's their duty to help those organizations that would fight Israel and would eventually bring Israel to its knees.

Remember that Iran for instance supported Hezbollah in Lebanon, supplied Hezbollah with tens of thousands of rockets that were aimed towards Israel. And Israel afraid that with a growing Iran's presence in Syria, Syria would become another front for confrontation with Israel and therefore Israel tries to prevent the consolidation of Iran in Syria.

Sputnik: What consequences can this have on the conflict in Syria? What response are we likely to see from the Syrian government?

I'm not sure that President Assad has the power to restrain the Iranians. He tried in the past to intercept Israeli flights over Syria and not very successfully. So clearly the Syrian government is unhappy about it, but we have to admit that at the end of this civil war in Syria, the Syrian government is not the master in its house. It is very much dependent on its stronger, more powerful allies.

Sputnik: Previously reports suggested that the US withdrawal from the nuclear deal with Iran could put Israeli national security under the grave threat. What's your take on this?

Meir Litvak: It depends on how Iran will react. If Iran decides, for instance, following American withdrawal, Iran sheds all restrains on its nuclear activity and that Iran would now, let's say, tries to proceed with full speed toward uranium enrichment to build up its nuclear infrastructure, then clearly it may have very negative effect on Israel.

Another possibility is Iran will again take a more active role against Israel through Syria, through Lebanon in an attempt to show that it will not cave in to American pressure. Such a possibility exists. But in my view, the greatest danger is that Iran would decide it will now renege on its own commitments to the nuclear agreement and now it will proceed with full speed toward achievement of nuclear capabilities.