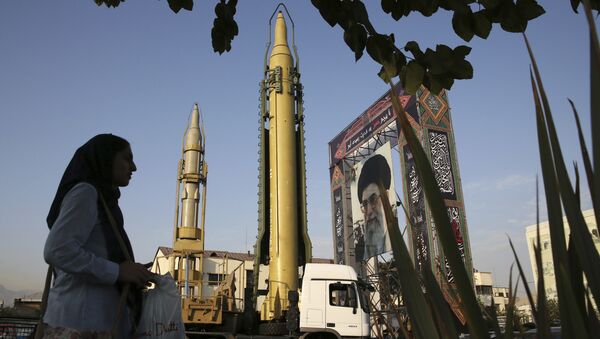 "The chancellor called for holding negotiations with Iran and an extended number of states on its ballistic missile program as well as on its international activities including those in Yemen and Syria," the statement said.

The conversation was held two days after US President Donald Trump’s decision to withdraw the country from the Joint Comprehensive Plan of Action (JCPOA), known as the Iranian nuclear deal.

Iran continues to develop its missile program as it is not a part of the JCPOA, which is sharply criticized by the United States and Israel.

'Israel’s Conflict With Iran in Syria Not Linked With Nuclear Deal'- Analyst
Iran is also actively involved in the conflicts in Yemen and Syria supporting Shia forces in these countries – the Houthi movement called Ansar Allah in Yemen and the Syrian government headed by President Bashar Assad, who belongs to the Alawite minority.

Meanwhile, The European Union on Thursday called on Iran and Israel to avoid the escalation of tensions in light of recent developments in Syria.

"Reports about last night's Iranian attacks against Israeli army posts from inside Syria to which Israel responded by striking against Iranian targets in Syria are extremely worrying," the Spokesperson for the EU External Action Service said in a statement.

"As the EU has said repeatedly, Israel has the right to defend itself. At the same time, we call on all regional actors to show restraint and avoid any escalation, which could further undermine regional stability," the statement said.

000000
Popular comments
Well, Rouhani could ask Merkel too to discuss Germany's programs of chemical and bio weapons of mass destruction. I am sure Angela would like to give some contribution to making our world safer and share Germany's expertise on creation and production of those WMD's... And it would be especially helpfull to know against whom Germany plans to use those weapons.
oldman
11 May 2018, 01:46 GMT1
000000
This entire fiasco smells to high heaven like a planned assault on Iran by the United States, Briton, Israel, Germany and France to force the Iranians to give up their missile program and disarm so regime change can be effected by military force.
hopscotch64
11 May 2018, 02:14 GMT1
000000
Newsfeed
0
New firstOld first
loader
LIVE
Заголовок открываемого материала
Access to the chat has been blocked for violating the rules . You will be able to participate again through:∞. If you do not agree with the blocking, please use the feedback form
The discussion is closed. You can participate in the discussion within 24 hours after the publication of the article.
To participate in the discussion
log in or register
loader
Chats
Заголовок открываемого материала
Worldwide
InternationalEnglishEnglishMundoEspañolSpanish
Europe
DeutschlandDeutschGermanFranceFrançaisFrenchΕλλάδαΕλληνικάGreekItaliaItalianoItalianČeská republikaČeštinaCzechPolskaPolskiPolishСрбиjаСрпскиSerbianLatvijaLatviešuLatvianLietuvaLietuviųLithuanianMoldovaMoldoveneascăMoldavianБеларусьБеларускiBelarusian
Transcaucasia
ԱրմենիաՀայերենArmenianАҧсныАҧсышәалаAbkhazХуссар ИрыстонИронауОssetianსაქართველოქართულიGeorgianAzərbaycanАzərbaycancaAzerbaijani
Middle East
Sputnik عربيArabicArabicTürkiyeTürkçeTurkishSputnik ایرانPersianPersianSputnik افغانستانDariDari
Central Asia
ҚазақстанҚазақ тіліKazakhКыргызстанКыргызчаKyrgyzOʻzbekistonЎзбекчаUzbekТоҷикистонТоҷикӣTajik
East & Southeast Asia
Việt NamTiếng ViệtVietnamese日本日本語Japanese俄罗斯卫星通讯社中文（简体）Chinese (simplified)俄罗斯卫星通讯社中文（繁体）Chinese (traditional)
South America
BrasilPortuguêsPortuguese
NewsfeedBreaking
02:16 GMTGerman Politicians Slam University Guidelines to Implement ‘Gender-Neutral’ Language
01:39 GMTThe Last Time the US Gave an Ally Nuclear Technology, France Tried to Quit NATO
01:36 GMTAntarctic Ozone Hole Now 'Larger Than Usual', Covering Entire Continent, Scientists Say
01:22 GMTTrump Allegedly Joked That Jared Kushner Is ‘More Loyal to Israel Than US’
01:15 GMTVogue Releases Video of AOC’s ‘Dress Prep’ for Met Gala
00:25 GMTNo New Date Set for Resumption of Pretrial Hearings of 9/11 Case in Gitmo, Spokesperson Says
00:06 GMTUS Closes Del Rio Port of Entry on Texas-Mexico Border Due to Influx of Migrants
00:03 GMTNew Research Sheds Light on How to Tackle Obesity
YesterdayWhite House Confirms in Touch With France Over Envoy's Recall, Will Work to Resolve Issues
YesterdayTop Senate Defense Panel Republican Says Biden Ultimately Liable for Kabul Drone Strike
YesterdayGantz: Israel Could Accept Return to JCPOA if US Has ‘Plan B’ for Iran’s Nuclear Program
YesterdayUS Judge Denies Giuliani’s Request to Return, Destroy Seized Evidence, Reports Say
YesterdayFrench Court Finds Man Guilty of Cartoons Portraying Macron as Hitler Over COVID-19 Policies
YesterdayAustralia's Great Emu War: How a Nation Declared War on a Bird and Lost
YesterdayBlinken Vows to ‘Keep Normalization Marching Forward’ on One-Year Anniversary of Abraham Accords
YesterdayEx-Algerian President Abdelaziz Bouteflika Reportedly Dies Aged 84
YesterdayAct of Sabotage Results in Power Outage in Damascus, Energy Minister Says
YesterdayOld Friends Are Not the Best?
YesterdayMilley Assured Pelosi That US Military, Not Trump, Controlled the Nukes, Vice Chairman Says
YesterdayFed. Chief Powell Orders Sweeping Ethics Review Amid Trading Scandal at Federal Reserve