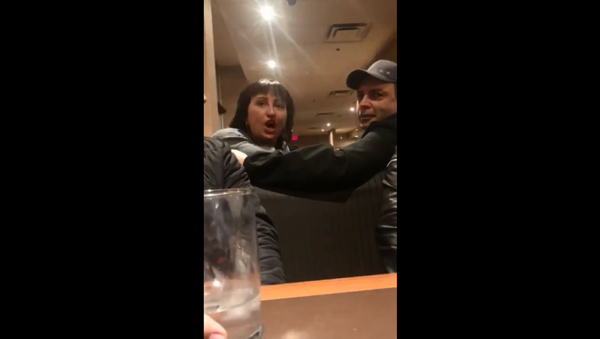 © Screenshot/Monir Omerzai
Subscribe
Canada's Lethbridge Police Department announced Wednesday it is investigating a video that shows a woman going on a racist rant at a Denny's restaurant, telling a group of diners to "go back to where you came from."

The footage, recorded by Monir Omerzai, one of the diners verbally attacked, was uploaded on Facebook late Tuesday after one of Omerzai's friends convinced him to share the recording. The incident took place on April 21 in Lethbridge, Alberta.

The woman, who was later identified as British Columbia's Kelly Pocha, arrived at the restaurant with her husband and sat in the booth next to Omerzai and his three friends. The video captures the moment Pocha began her rant.

"Shut your f**king mouth, then, 'cos you know what, you're dealing with a Canadian woman right now, and I will leap across the table and punch you right in your f**king mouth," Pocha is heard saying in the video. "Cause you're a f*cking ignorant prick is what you are… holy f*ck… go back to your f*cking country."

While Pocha continues to yell obscenities, one of the men in Omerzai's group points out to her that "you're the one who started" before another chimes in suggesting Pocha should be more respectful.

"Excuse me, excuse me, I was born and raised here. I am Canadian," she cries before cutting off one of the men who replies that, he, too, was Canadian.

After Pocha accuses the men of not paying taxes, she proceeds to stand up, lean toward Omerzai's table and tell the group that they're "not dealing with one of your Syrian b*tches right now."

When a Denny's employee enters the mix, Pocha explains that the whole incident began because one of the men in the group was "eyeing her." Speaking to Lethbridge News Now, Pocha expanded and said that she thought that the men were "making fun of her" when they were speaking in their native language, Dari.

The video ends with the Pocha and her husband getting out of their booth and asking to be seated elsewhere.

"Speak English or don't speak at all," she's heard saying.

Omerzai, who moved to Canada some 13 years ago from Afghanistan, told CBC that he was unsure what triggered Pocha since the group wasn't paying any attention to her.

"She started looking like this toward us, we just said, 'Is everything OK?' or 'Is there any problem?'" Omerzai told the publication of the incident. "From there she started going off. We were laughing and talking in our own language… but obviously we were not saying anything about her."

"What's going through my head is why is there so much hate in her? Why would she even say that, to go back to my country? We're all immigrants here," he added.

After the altercation was nearing its end, police arrived on the scene and requested that both parties vacate the restaurant at the request of the restaurant.

A Wednesday statement from Denny's corporate office stressed that management followed protocol by calling in law enforcement after it was "unable to de-escalate the situation."

"We do apologize and regret that our guests had to endure this customer's terrible behaviour and continue to work with local officials on their investigation of this incident," it added.

Though Pocha is sticking to allegations that she was provoked, she has apologized and admitted that her remarks were racist.

"Yes, my lash back was inappropriate and racial, but I was merely standing up for myself as I was being disrespected that night," Pocha told Lethbridge News Now. "It is also disheartening to see that people are so quick to judge and make racial/degrading comments about myself and my family without knowing the whole truth."

"I would like to formally apologize to these men, as I did to the staff and management at Denny's in Lethbridge two weeks ago for my actions. I am human, and I make mistakes," she added before saying that she was now unemployed after her employer, Cranbrook Dodge, fired her over the incident.

In its own Facebook statement, Cranbrook Dodge stated that moving forward it would "look at our culture and address any undercurrents of racism or intolerance."

Though police have stated that they've interviewed several people and reviewed surveillance footage belonging to the restaurant, the "investigation in the matter is ongoing."