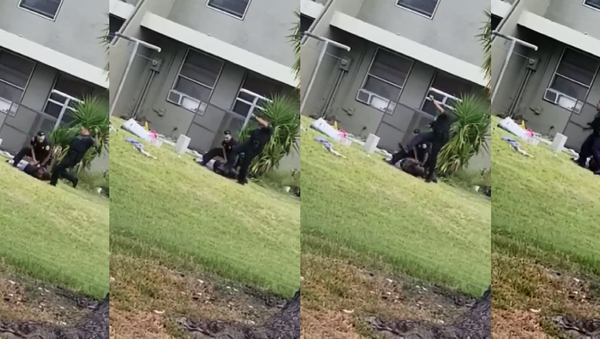 A police officer who was suspended from the Miami Police Department after a video emerged of him kicking a suspect in the head was charged with assault Tuesday. But the viral video hasn’t left everyone upset with the officer: the local police union has commended his “great restraint.”
The officer, Mario Figueroa, was suspended within hours of the incident and the video surfacing on May 4, and was charged with misdemeanor assault within four days.

After Figueroa was noted in the video and suspended, the Miami Herald spoke to a criminal defense attorney not connected to the case who cautioned that if Figueroa's kick never actually hit the suspect, David Suazo, who was lying facedown on the ground in handcuffs, the officer could be convicted of assault, which carries lesser penalties than the battery charge he would likely face if he made contact with Suazo. If Suazo was injured, the charge could be elevated to the even more serious "aggravated battery."

Multiple politicians warned that the officer might argue in his defense that he never actually hit the suspect's face, even though just attempting to kick him is both a crime and against police policy, according to the Miami New Times.

Bodycam video from Figueroa from later in the day shows Suazo again facedown on the ground and in handcuffs, but this time in a building.

Suazo can be heard telling the officer "learn how to kick, my boy."

​"I needed you to comply, so me pretending to kick you got you to comply, right?" the officer asked Suazo. "You would have connected on that kick though," he continued. "I don't play soccer; none of us play soccer."

After Figueroa was charged, the Miami Fraternal Order of Police (FOP) released a statement entitled "Mario Figueroa Is Being Used As A Scapegoat."

"The Fraternal Order of Police took the high road and made no statements in anticipation of the bodycam video being released clearly proving that even the suspect himself stated that he wasn't kicked," the statement reads. It chastises the media for stating Figueroa had "kicked the suspect on the head "from the onset."

"The only thing brutal about this entire incident is the suspect that endangered the lives of the community in which our Miami Police officers risked their lives to take this dangerous man off the streets," the statement, signed by Miami FOP President Edward Lugo, reads. It notes that, "as viewed on the suspect's mugshot, there isn't a scratch on him."

Lugo took over the FOP in October after the former president, Javier Ortiz, who has called Lugo his "best friend," stepped down when he was promoted to captain of the police department. Ortiz, as FOP president, had helped secured Lugo's position in the police department after the Miami Police Department's Internal Affairs division recommended he be fired in 2009 for getting caught in an FBI sting looking the other way as fake officers told him of their plans to ship stolen goods around.