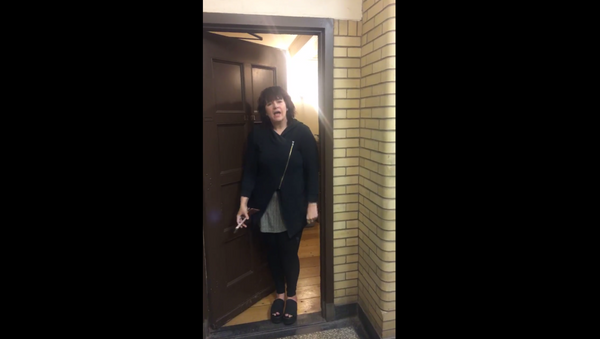 Lolade Siyonbola, a black graduate student at Yale University, was interrogated for some 15 minutes by officers from the Yale Police Department on Monday after a white fellow student called the cops because Siyonbola was sleeping in their shared dormitory's common room.

Siyonbola opted to record her interaction with the student and law enforcement officers after the student woke her up and informed her that police had been called. She later uploaded recordings onto Facebook.

The first video begins with the student taking several pictures of Siyonbola at the elevators, before saying, "I have every right to call the police. You cannot sleep in that room."

Siyonbola later told the student to "get my good side" before hopping on the elevator.

The second video, which was posted as a livestream on Facebook, shows the grad student's interaction with responding officers.

Asking for Siyonbola's school identification, one of the officers explains that they need the card in order to "make sure you belong here."

"I deserve to be here… I paid tuition like everybody else. I am not going to justify my existence here," Siyonbola told one of the officers after being asked to "sit tight" while they verified her information. "I am not going to be harassed."

Though Siyonbola's initial interaction remained relatively calm, things got a little sour after the two officers questioning the 911 caller returned to speak with Siyonbola.

She later responded by telling the officer to "continue," adding, "I hope that makes you feel better."

"It's not about feeling powerful. It's about getting down to the bottom of this. We don't know why you're not in the system and you're not being very helpful right now," the officer fired back. Siyonbola told the officer, "you wouldn't be very helpful either if you were woken up and harassed."

Roughly 15 minutes passed before officers were finally able to verify that Siyonbola was a student at the university. According to video shared by the student, Siyonbola's name was misspelled in the school's system, which is what led to the officers' confusion as to whether or not she was a student.

The livestream ended once Siyonbola was given her card back and told viewers that she would be following up the stream with comments on the altercation.

Responding to the incident, Lynn Cooley, the dean of the Graduate School of Arts and Science, sent out an email to doctoral and masters students on Tuesday, stressing that the Monday incident is a reminder on the importance of inclusivity, Yale Daily News reported.

"Incidents like that of last night remind us of the continued work needed to make Yale a truly inclusive place," Cooley said in the statement. "I am committed to redoubling our efforts to build a supportive community in which all graduate students are empowered in their intellectual pursuits and professional goals within a welcoming environment. An essential part of that effort must be a commitment to mutual respect and an open dialog."

Siyonbola has since taken to Facebook and said that she's "grateful for all the love, kind words and prayers."

A statement has not yet been released by Yale police on the matter.