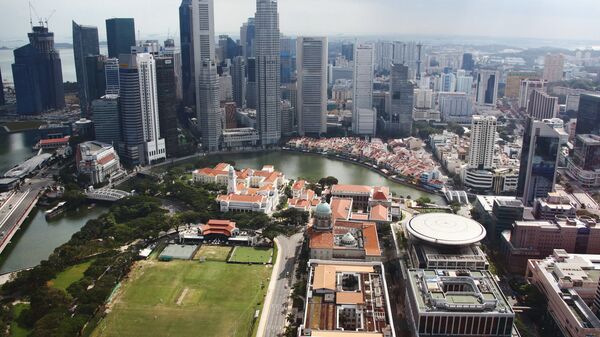 WASHINGTON (Sputnik) - US officials have been instructed to begin implementing plans for convening the historic meeting between President Donald Trump and North Korean leader Kim Jong Un in Singapore, US media reported.

The decision is ultimately up to Trump, CNN reported on Wednesday, citing two people familiar with the situation. Trump earlier ruled out holding the meeting in Korea’s Demilitarized Zone (DMZ), the report added.

Singapore has been the preferred location among US officials because it was seen as a more neutral location over spots closer to Pyongyang, according to the report.

Thank You for 'Bringing Us Home' - Americans Freed by North Korea Thank US
Earlier in the day, Trump said Secretary of State Michael Pompeo met with North Korean leader Kim Jong Un to discuss details of the upcoming summit between both leaders.

During Pompeo’s visit, Kim released three US citizens who were detained in North Korea and will arrive at Joint Andrews Base near Washington, DC early Thursday morning.

Pompeo told reporters earlier in the day that the date and location of the Trump-Kim summit would be announced early next week.

North Korean leader Kim Jong Un has lauded the planned summit with US President Donald Trump as a way toward "a good future," media reported Thursday.

"He said that the coming DPRK-US summit would be a historic meeting for the excellent first step toward promotion of the positive situation development in the Korean peninsula and building of a good future," South Korea’s Yonhap said, citing a statement carried by the North’s KCNA news agency.

Majority of US Citizens Support Planned Trump-Kim Summit - Poll
Kim met earlier this week with US State Secretary Michael Pompeo, who arrived in Pyongyang to set up the summit. KCNA said "a satisfactory consensus" had been reached.

The North Korean state media said Kim had "accepted an official suggestion" from the US president and "granted amnesty" to three jailed Korean-Americans. They departed for the United States on Wednesday aboard Pompeo’s plane and arrived in Alaska.

The release of the hostages from North Korean labor camps, where they had been held on allegations of anti-state crimes, was encouraged as a goodwill gesture by the United States ahead of the talks, scheduled for late May or early June.