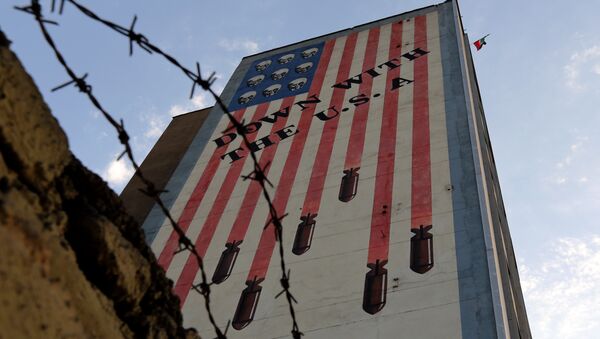 "I am announcing today that the United States will withdraw from the Iran nuclear deal," Trump said during a press conference at the White House on Tuesday.

The president immediately signed a measure to reinstate high-level sanctions on Iran which were previously waived under the agreement. Trump said that a nuclear arms race would occur in the Middle East if the JCPOA was allowed to remain in place. He claimed the current deal allows Iran to continue enriching uranium.

The United States will re-impose all nuclear-related sanctions on Iran that were waived by the JCPOA, the US Treasury Department said in a press release on Tuesday.

"Treasury’s Office of Foreign Assets Control (OFAC) is taking immediate action to implement the President’s decision. Sanctions will be reimposed subject to certain 90 day and 180 day wind-down periods. At the conclusion of the wind-down periods, the applicable sanctions will come back into full effect," the release said.

US Treasury to Reimpose Sanctions on Iranian Energy, Shipbuilding Sectors
In three months, the US sanctions will take effect immediately to target Iran’s ability to borrow in the global financial markets and restrict its trade in auto and aircraft, the release said.

Iran’s trade in gold, precious metals and products like aluminum, steel coal and industrial software will also be impacted. In six months, the US sanctions will go into full effect against Iranian oil, energy and shipbuilding, according to Treasury.

National Security Adviser John Bolton said during a conference call earlier on Tuesday that the United States must "vigorously" pursue additional sanctions to apply more economic pressure on Iran in order to cut off its revenue for its nuclear and ballistic missile programs. He added that additional US sanctions against Iran are very possible.

"I believe that the decision to put the JCPOA at risk without any Iranian violation of the deal is a serious mistake," Obama said on Tuesday.

'Today's Announcement Is So Misguided': Obama Slams Trump's Iran Deal Decision
The Iran deal was one of President Barack Obama’s and Kerry’s key achievements during his presidency.

Obama warned that the US withdrawal could lead to an arms race in the most dangerous region in the world. Kerry, for his part, echoed the same theme, while also suggesting the decision is inimical to US security interests.

Kerry highlighted the importance of Europe's actions in response to Trump's decision. Kerry expressed hope the international community will do its best to preserve the nuclear deal.

US Senator Bernie Sanders said Trump’s decision isolates the United States from its important European allies. The United States must seek a better relationship with the Iranian people and seek a more constructive role for Iran in the region, Sanders added.

US Senate Majority Leader Mitch McConnell said in a statement on Tuesday that he anticipates the United States will enter talks with its European partners to negotiate a better Iran nuclear deal.

Arms Control Association Nonproliferation Policy Director Kelsey Davenport told Sputnik that Trump’s reckless decision to leave the JCPOA with Iran will boost the odds of a nuclear crisis but also pointed out that other actors need to step up to fill the void.

"It will be critical that the remaining partners in the agreement — China, France, Germany, Russia, and the United Kingdom — take immediate steps to shore up the accord, insulate legitimate business with Iran from US sanctions, and urge Iran to stay within the constraints of the deal," Davenport said.

Israeli Prime Minister Benjamin Netanyahu on the contrary said the Iran Deal did not push war further away, but brought it closer.

World
Israel Thanks Trump For His Decision to Withdraw From Iran Deal - Netanyahu
Iran aggression dramatically increased under the agreement, Netanyahu said.

Iranian President Hassan Rouhani in reaction to Trump’s move on Tuesday said his country will not withdraw from the JCPOA as the agreement remains between Tehran and the five remaining participants of the deal.

"From now on, the JCPOA is an agreement between Iran and five countries," Rouhani said in an address to the nation after announced US withdrawal.

The Iranian Foreign Ministry will decide on a response to the US withdrawal from the Iran nuclear deal after analyzing whether the remaining participants could ensure its implementation.

Rouhani also said he has instructed the Iranian nuclear scientists to be ready, if necessary, to resume industrial enrichment of uranium without any restrictions. Iran’s economy will also continue to grow despite the US withdrawal from the Iran deal, which includes reinstating sanctions against Tehran, Rouhani said.

Rouhani added that he instructed the Iranian Foreign Ministry to hold talks and consultations with the EU countries and two major powers — Russia and China — within a few weeks.

Russia
Russian FM: Moscow Regrets US Decision to Withdraw From Iran Nuclear Deal
EU foreign policy chief Federica Mogherini said in response to the US move that the European Union was concerned over Washington's decision and called on the international community to preserve the JCPOA. Leaders of the United Kingdom, Germany and France also issued a joint statement expressing concern over the US withdrawal from the JCPOA and reaffirmed their commitment to the nuclear deal.

Russian lawmaker Andrei Klimov, who serves as the head of the Russian upper house's Committee on State Sovereignty Protection and deputy head on International Affairs Committee, said China and Russia have no reason to support the US decision and sanctions.

Klimov added that it is possible Germany, France and other EU countries will not abide by the US sanctions.

World
Tehran Ready to Resume Its Nuclear Work Amid US Decision on Deal - Rouhani
"Washington's incompetence brings the United States beyond the framework of civilized international relations, the damage to the country's reputation is enormous. In addition, it is a kind of signal, including for Pyongyang, not to trust the United States," Klimov said.

The Russian Foreign Ministry pointed out that the US decision sharply violated international law. It added that Moscow was open for further cooperation with other JCPOA parties and for continuation of dialogue and cooperation with Tehran.

Russia's Permanent Representative to the International Organizations in Vienna, Mikhail Ulyanov, told Sputnik after Trump’s announcement that the US decision to withdraw from the JCPOA is a major setback to nuclear nonproliferation efforts.