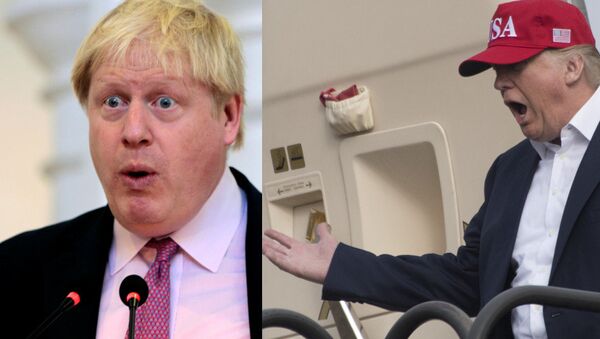 Boris Johnson and Ivanka Trump's meeting on May 8 was apparently the last effort to convince the US to stay in the Iran nuclear deal. He even tweeted a picture of them smiling shortly after the talks; but as it emerged later, it was mere bravado.

After the picture popped up on social media, Johnson was immediately mocked by netizens who said he looked like “a Donald impersonator,” wearing smart suit with a maroon tie with his typical blonde hair a bit awry, and most importantly, copying Trump’s favorite thumbs up gesture.

The striking resemblance was first noticed after Ivanka retweeted Johnson’s pictures today, with one user even remarking that Johnson is "a creepier version of her daddy," while one of the latest comments reads that the British Foreign Secretary looks "eerily like Donald Trump."

What sane person, let alone a foreign minister, would do this?

Others started posting hordes of jokes and even sarcastic remarks on the subject, some of which you can find below.

What a hypocrite. Johnson appealed her father not to scrap the Iran Agreement. But he’s ok snuggling up to the daughter.

There isn't much difference between con Trump n con Johnson. Both changed their German names; both are envious of a previous leader of their nations: Trump is jealous of Prez BO, Johnson is jealous of David Cameron. Both are ambitious without talent. Both are political jokes!

The British foreign secretary’s meeting with the US president’s daughter came just a day before Britain along with France and Germany announced their commitment to the 2015 P5+1 nuclear deal on Iran after Trump announced the US would pull out of the accord.