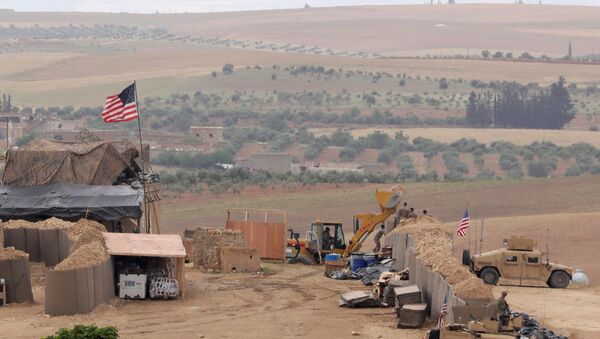 Ankara and Washington are reportedly in intense negotiations over the fate of the northern Syrian region of Manbij as senior US officials remain at odds over the withdrawal of American troops from Syria.

Sharfan Darwish, spokesman for the Manbij Military Council of the US-backed Syrian Democratic Forces (SDF), has said that a US military base was set up in Manbij about three months ago following Turkey's threats to advance on this northern Syrian region.

"After the Turkish attack on Afrin and the increase in Turkish threats towards Manbij, coalition forces built the base to monitor and protect the border [between the combatants]," Darwish was quoted by Reuters as saying.

The remarks came after Free Syrian Army commander Ahmed Osman confirmed to Sputnik that Turkish and US officials are in intense talks over the fate of Manbij.

Earlier this week, Iran's Fars news agency reported that a military convoy departed from a US military base located in the Syrian city of Kobani and set course for Manbij.

A Syrian shepherd herds his flock, as he passes in front of a newly installed U.S. position near the tense front line between the U.S-backed Syrian Manbij Military Council and the Turkish-backed fighters, in Manbij, north Syria, Wednesday, April 4, 2018
© AP Photo / Hussein Malla

The convoy, which included 10 Humvees, "three trucks carrying short-range missiles" and "two vehicles equipped with advanced radar and communication systems," was accompanied by an unspecified number of personnel, according to Fars.

Earlier in April, Rezan Gilo, joint chief of defense in Syrian Kurdistan (Rojava), told Sputnik that the US-led coalition is building new bases in northern Syria, including Manbij, which he said is part of the coalition's cooperation with the SDF.

Turkey aims to gain control of Manbij as part of its Operation Olive Branch, which kicked off on January 20, 2018.

Ankara blacklists the YPG, the backbone of the SDF, as an affiliate of the Kurdistan Workers' Party (PKK), which is outlawed in Turkey as a terrorist organization.

In separate development in April, US Secretary of Defense James Mattis declared that the US military would not withdraw its forces from Syria, but would expand operations there and "bring in more regional support."

READ MORE: WATCH Kurdish Fighters Reveal the Reason for US Base in Manbij

US Dispatches More Military Gear to Kurds in Syria - Reports
The statement came in the face of Donald Trump's previously announced intention to pull US troops out of Syria in the near future, which was met with a conflicting reaction from the president's special envoy to the US-led coalition, Brett McGurk, as well as incoming US Secretary of State Mike Pompeo and Joint Chiefs of Staff Chairman Joseph Dunford.