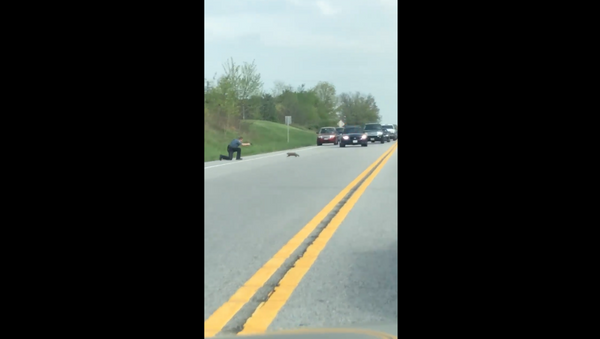 Maryland's Carroll County Sheriff's Office has come under fire after one of its deputies was recorded on Sunday shooting dead a groundhog who was creating a traffic jam.

The incident, which was recorded by driver Justyna Olkowska, was being filmed in the hopes of capturing a funny interaction between the officer and groundhog. Olkowska's laughs quickly stopped after she saw the officer get down on one knee and fire at the animal.

​"OMG (laughing) he's talking to the freaking groundhog," Olkowska says in the recording. "He's like 'listen, pet me'… this is not happening right now… aww, he wants to get petted."

Seconds later, Olkowska gasps and yells out "no" as the officer fires off a bullet at the groundhog.

"Oh my gosh! Oh no… oh no," she repeatedly says as the groundhog is seen struggling to get back up. "Oh my god. Oh my god… he shot… oh my god."

As the officer moves to fire off another bullet, Olkowska goes silent for several seconds before the video cuts off.

A statement released by the department explains that the deputy had pulled over on Liberty Road in Eldersburg, Maryland, after he realized that an animal in the road was "causing vehicles to stop and creating a hazard."

"[The deputy] realized that it was not responding as expected for an animal that was not being cornered or trapped," the statement said. "Believing the groundhog to be either sick or injured, the deputy then put the animal down for the public's safety."

In an additional statement, the department's spokesperson, Cpl. Jon Light, stressed that "it is within our policy to dispose of any animal that could pose a health threat."

In an article published Monday by the Baltimore Sun, Olkowska said that doubled down that she'd only decided to record the incident because it was "a cute encounter where I thought he was trying to help the little fella."

"I obviously did not think that it would take this turn and was kind of shocked. I am sure the officer did the best thing in this situation. It is not for me to judge," she added.

According to Light, the police department is reviewing the incident. The Carroll County Humane Society later picked up the groundhog.