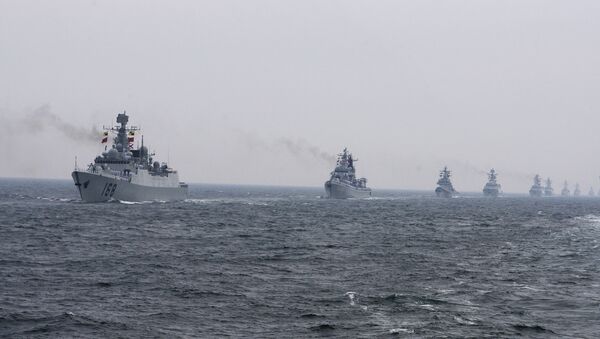 New Delhi (Sputnik) — Downplaying the Chinese naval build-up in the Indian Ocean Region, India has claimed there is no tension between India and China at the moment. Indian Defense Minister Nirmala Sitharaman on Tuesday said that recent efforts by New Delhi and Beijing to intensify engagement are "a big change."

She was interacting with the media after the inauguration of the Naval Commanders' Conference in New Delhi.

Indian Navy Tracks Chinese Warships in IOR, Wittily Wishes 'Happy Hunting'
Sitharaman avoided the question about a Chinese presence in the Indian Ocean region (IOR), such as a deep-sea port at Gwadar, Pakistan, and other locations.

"We are talking and meeting each other. That is a big change," Sitharaman said.

Acknowledging the Chinese naval strength in operating its warships at a great distance from its shores, Indian Navy Chief Admiral Sunil Lanba, recently, had said the Indian Navy is "keeping a sharp eye on the pattern and periodicity of extra-regional deployments" in the Indian Ocean.

Last year, the Indian Navy re-oriented its fleet pattern to that of a mission-based deployment in the wake of the increased presence of Chinese naval ships and submarines in the Indian Ocean Region.

China Unlikely to Match India Strength in Indian Ocean in Near Future - Analysts
Nevertheless, defense minister Sitharaman's claim of peace with Beijing has not found much acceptance from Chinese opinion makers, who term the Indian Navy's mission-based deployment as a sign of India's fear of losing influence in the region.

"India has always kept alert and been sensitive to China's military deployment in the Indian Ocean. India is worried that China's presence in the area would weaken Indian's influence in the region," Hu Zhiyong, a research fellow at the Shanghai Academy of Social Sciences' Institute of International Relations, told the Global Times.

The Indian Navy's mission-based deployment has been operational despite critical capability shortfalls in ship-borne multi-role helicopters, reconnaissance aircraft, unmanned platforms, conventional submarines and surface ships, which pose serious concerns regarding the exposure of combat assets and trained personnel. Nonetheless, Sitharaman assured the naval commanders that the issues of capability shortfall are being given due impetus at the government level and measures are being put in place to mitigate these shortcomings at the earliest.