Qatar to Strengthen Ties With Moscow, Washington Amid Gulf Boycott 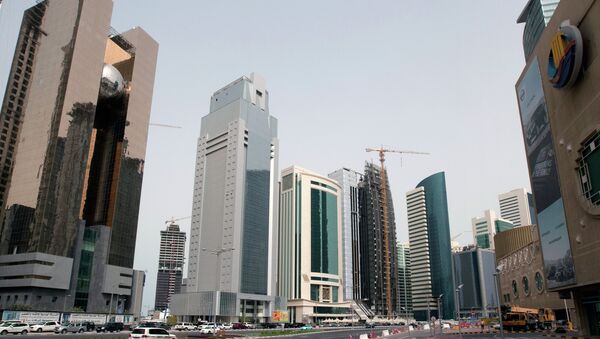 © Sputnik / Vitaliy Belousov
/
Go to the photo bank
Subscribe
As other Persian Gulf states proceed with the boycott of Qatar, the Qatar Investment Authority (QIA) is about become the third-largest shareholder in Russia’s largest oil company, Rosneft, after QIA and another shareholder, Glencore, dropped the deal with China’s CEFC. In the meantime, Doha seeks to become an investor in a US media company, too.

The Qatar Investment Authority is about to buy a major stake in Russia's largest oil company Rosneft, which would make QIA the third-largest stakeholder, behind British BP and Russian Rosneftegaz.

The QIA's decision to step in follows a decision by the consortium between QIA and the Swiss company Glencore, who owned 19.5 percent of Rosneft, to drop a deal with Chinese company CEFC. Under the deal, CEFC was about to get some 14 percent of the Russian company, Vesti Finance reports. However, the deal got stuck because CEFC's management came under investigation for economic crimes allegations.

"A statement issued by Glencore didn't explain why they were canceling the sale, but CEFC has been struggling with debt," Mining Weekly suggested as another possible reason.

At the same time, Qatar is also mulling a purchase in US' Newsmax, according to a Haaretz report. As Politico points out, Newsmax is run by Chris Ruddy, who is a friend and an ally of US President Donald Trump. According to Politico's sources, the talks with Newsmax are overseen by none other than a younger brother of Qatar's Emir Tamim bin Hamad Al Thani.

"Last month, Trump met with Emir Al Thani in the Oval Office and called him "a great friend of mine,'" Politico noted.

Ruddy has so far declined to comment on the deal and seeks to disavow any information from the media.

The deal comes at a time that Qatar's geopolitical position is in flux. The so-called Arab Quartet — Saudi Arabia, UAE, Bahrain and Egypt — imposed a boycott on Qatar, issuing a number of demands including that the Gulf nation must stop supporting terrorism, close the Al-Jazeera TV Channel, reduce its relations with Iran and close a Turkish military base, according to the National. The four countries, three of them being Qatar's immediate neighbors, have imposed sanctions and cut ties with Qatar, which has led to certain economic difficulties for the Gulf state.

"The deals [with Rosneft and Newsmax] strengthen ties between both Moscow and Doha and between Washington and Doha, at a time when Qatar is facing boycott by its Gulf Arab neighbors," Haaretz report reads.

Scholar Doubts Qatar Able to Replace US Troops in Syria Amid Saudi Demand
Some experts note that Qatar, faced with the Arab Quartet's boycott, appears to have adopted a different strategy of strengthening ties with world superpowers directly. There is a massive US military base at Al Udeid that serves as the forward headquarters of US Central Command and the headquarters of US Air Forces Central Command. In the meantime, Qatar is in negotiations to purchase Russian-made weapons, including the S-400 advanced air defense systems, the more advanced cousins of the S-200 systems that performed so well in Syria against American, French and British cruise missile strikes last month.

"We have very close cooperation with Washington, but this does not mean that we can not look for other options," Qatari Foreign Minister Mohammed bin Abdulrahman Al Thani said, noting that he doesn't think that Qatar-US relations will deteriorate in future.