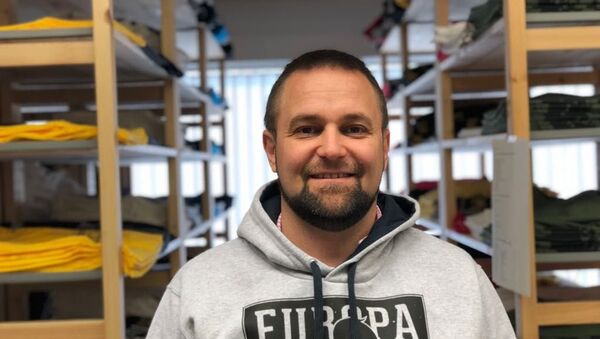 Tore Rasmussen, a prominent figure of the anti-immigration movement Generation Identity, has become yet another right-wing activist banned from entering the UK for committing nothing but "thoughtcrime."

By his own admission, Tore Rasmussen had been detained at Gatwick Airport, London, because British authorities believed his views represented a "serious threat" to the UK.

Thirty-seven-year-old Tore Rasmussen has been living in London since last December. On Friday evening he arrived home after a trip to Austria, but was stopped at passport control by the border authorities. A few hours later he was handed a denial of entry and was ordered to return to Austria with the next flight.

I am currently detained at Gatwick airport and have been refused entry to the UK. According to the Home Office, I "share values which do not commensurate with UK society" which is newspeak for "You reject Multiculturalism". #GenerationIdentity #DayForFreedom #FreeSpeech

The reasoning behind the denial of entry is that the Norwegian has values and attitudes that "do not match those of the British society." Furthermore, Rasmussen's behavior was said to represent a "serious threat to one of the fundamental interests of society, more specifically to counteract extremism and protect common values."

"I think it's a dangerous development when the authorities restrict freedom of speech to such an extent that they deny you entry because they do not like what you believe in. I have not broken any laws, I have not said anything untrue or harassed anyone. But, apparently, they believe I have right-wing opinions that do not match British values, something I disagree with," Rasmussen told the daily newspaper Aftenposten.

I can't be with you in London today, but I stand with you for free speech. #DayForFreedom #FreedomOfExpression #freeSpeech pic.twitter.com/draBimnKFO

By Rasmussen's own admission, the decision is related to the fact that he was about to take part in a conference under the auspices of Generation Identity. "All I want is to have a free and open debate about mass immigration and the shadow sides of multiculturalism," he was quoted as saying by Aftenposten.

Beautiful day in London this morning. Glad I was only keept in the holding room for one night. Now being deported from the UK for the "crime" of wanting a free an open debate about multiculturalism and mass immigration. #DayForFreedom #freeSpeech pic.twitter.com/hNRTLqPVKq

Michael Charouneau, a press officer at the UK Department of Interior, told Aftenposten that they do not usually comment on individual cases. He further stressed that the British authorities have the right to refuse entry for persons whom they consider to constitute an "actual, genuine and sufficient threat to the fundamental interests of society."

Postdoctoral professor Jacob Aasland Ravndal at the Center for Extremism Research at the University of Oslo stressed that Britain has long had the practice of denying people entry based on political opinions.

"They have really stepped up in recent months. There is a new pattern of actions aimed at the far right, including more related to Generation Identity groupings. This is something we are following with interest, as it is a practice that not so many other countries currently follow," Ravndal told Aftenposten.

Generation Identity (in some countries known as 'Identitarian Movement') is self-described as a "Europe-wide patriotic youth movement that promotes the values of homeland, freedom and tradition through peaceful activism, political education, and community & cultural activities." Its goal is to secure a peaceful future within Europe by "following the path forged by the ethno-cultural tradition of ancestors." Today, local Generation Identity groups exist in France, Germany, Italy, Austria, and the UK.

Rasmussen was previously a member of Conservative Youth and the Liberal People's Party. He has also been involved with the organization With Israel for Peace, Aftenposten reported.