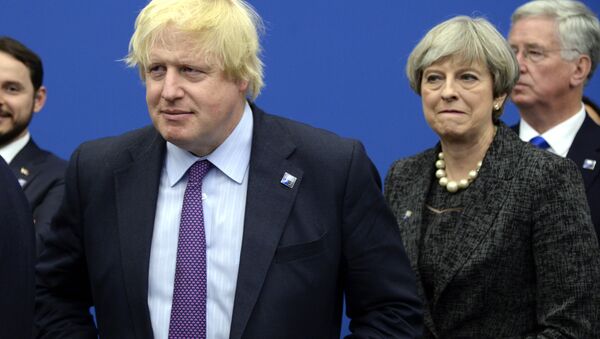 A group of pro-Brexit Conservative lawmakers have described UK Prime Minister Theresa May's proposal on a "customs partnership" with the EU as "undeliverable in operational terms."

US Foreign Secretary Boris Johnson has warned of a "whole new web of bureaucracy," which he said would emerge if the government approves London's trade cooperation plan with the EU, which was outlined by British Prime Minister Theresa May.

The Daily Mail cited Johnson as saying that "it's totally untried and would make it very, very difficult to do free trade deals."

"If you have the new customs partnership, you have a crazy system whereby you end up collecting the tariffs on behalf of the EU at the UK frontier," he noted.

Twitter users have, meanwhile, remained at loggerheads over Johnson's remarks with respect to May's proposal on post-Brexit cooperation with the EU.

He is right, for once. Of course he ignores the fact that leaving the single market is even more crazy.

PM should call bluff and sack him.
Leavers know a JRM leadership would command no majority in House or country.
Long past time their bluff was called.

Is he trying to out trump #DonaldTrump for criticizing colleagues

Totally about Boris and nothing to do with what is right for us. His ambition knows no bounds. May's total weakness as a PM and the divisions exposed. These people are supposed to be doing what's best for all of us. Let him go for Tory leader and put it to us in an election.

1)Surely he now must be sacked
2) surely both options have already been rejected by the EU.

Or did I miss something? https://t.co/7pKRz2xrVD

They are led by a one time politician who will ignore any insult, any undermining of her authority, as long as she can keep her toothless title of PM. I don't think it's possible for the UK to negotiate with a loose collection of parasites in any meaningful way

… and this is the language of would-be usurpers? It's one thing to speak plainly & another to equate insults with negative analysis.

They have all managed to pick words that also describe themselves.

Are you sure they were describing the policy and not themselves? Bonkers, Cretinous and Crazy sounds like a fabulous tribute band to Snap, Crackle and Pop.

Caption for the Tory party conference instead of strong and stable " Bonkers,Cretinous and crazy"

Meanwhile, Boris wants to schmooze D.Trump over Iran by suggesting he could be awarded Nobel Prize……..

Michael Gove has described Theresa May’s plan for a post-Brexit customs partnership as “bonkers”, Jacob Rees-Mogg has called it “cretinous” and now Boris Johnson has labelled it “crazy.” Heaven help us

Jonson's remarks came after May made it clear that she is now absolutely determined to fully withdraw the UK from the EU customs union within a wider Brexit process.

Earlier, the British PM proposed a hybrid option of a "customs partnership" with the EU stipulating that the UK would continue to collect tariffs set by the EU customs union for goods coming into the country on behalf of the bloc.

In a letter to May, an array of pro-Brexit Conservative lawmakers argued that the "customs partnership" is "undeliverable in operational terms and would require a degree of regulatory alignment that would make the execution of an independent trade policy a practical impossibility."

UK House of Lords Votes for Giving Parliament Final Say on Brexit Deal
UK Business Secretary Greg Clark, for his part, warned that thousands of British jobs could be at risk if no customs partnership is established between the UK and the EU.

During a nationwide referendum in the UK on June 23, 2016, more than half of the participants voted in favor of the country leaving the EU.

Britain is expected to pull out of the bloc by the end of March 2019, but London has been seeking a two-year transition period to smooth out the withdrawal, as well as guarantees of a future relationship with the EU.