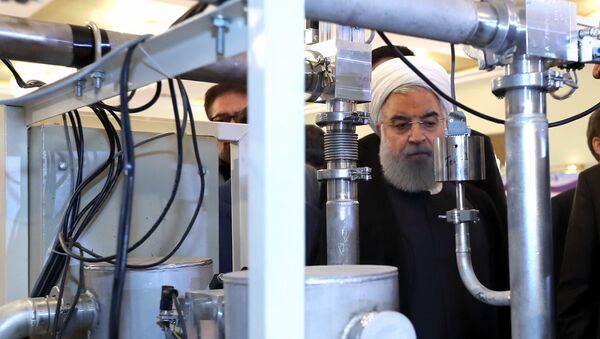 US President Donald Trump has a May 12 deadline to extend or rescind the Joint Comprehensive Plan of Action (JCPOA), commonly known as the Iran Nuclear Deal. Most analysts believe the president will cancel it. Trump announced on Monday he will announce his decision on the deal Tuesday afternoon at the White House.
https://www.spreaker.com/user/radiosputnik/trump-to-announce-iran-deal-decision-tom

Former US Army Colonel and State Department official Ann Wright, who resigned from the State Department one day before the United States invaded Iraq in 2003 to protest the invasion, joined Radio Sputnik's Loud & Clear to discuss Trump's dismissal of important evidence.

"This very comprehensive agreement with six countries has been totally dismissed by President Trump as he did dismiss it as a candidate," Wright told Loud & Clear hosts John Kiriakou and Brian Becker. "It is very disturbing that none of his advisors, those people that have been in government for a long, long period time, have not been able to convince him of the importance of keeping this agreement."

Heads of state from other signatories to the JCPOA, including French President Emmanuel Macron and German President Angela Merkel, have visited the US in recent weeks to pressure Trump into keeping the deal as they have extensive trade plans with the Islamic Republic. Were Trump to cancel the agreement, Germany, France, and anyone else seeking to do business with Iran could face sanctioning by the US Treasury Department.

Some analysts say that if the US were to break the deal, it would deepen North Korea's distrust of the US amid historic nuclear negotiations between the countries. However, Trump suggested that cancelling the Iran deal "sends the right message" to North Korea at an April 30 White House press conference, just three days after the groundbreaking inter-Korean summit. Wright told Loud & Clear that the US' policies towards Iran and North Korea as well as others like Iraq, Libya, and Syria has been one of "regime change," but cautioned that despite recent US insistances that they are not looking to topple the government of Kim Jong Un, "I wouldn't trust them too much on that."

"I don't think that there's much that the government of Iran can do to get out" of the US' regime change policies, Wright said, "particularly, the revolutionary government that's there."

Trump's Monday announcement followed an exchange of intelligence between the Israeli and American governments. Israeli Prime Minister Benjamin Netanyahu suggested in the 30 April televised presentation that Iran had reneged on its commitment to discontinue nuclear weapons development. Iran has denied the allegation and the United Nations' International Atomic Energy Agency, which was tasked with conducting rigorous inspections in Iran to confirm their compliance, issued a statement the following day, saying they "had no credible indications of activities in Iran relevant to the development of a nuclear explosive device after 2009."