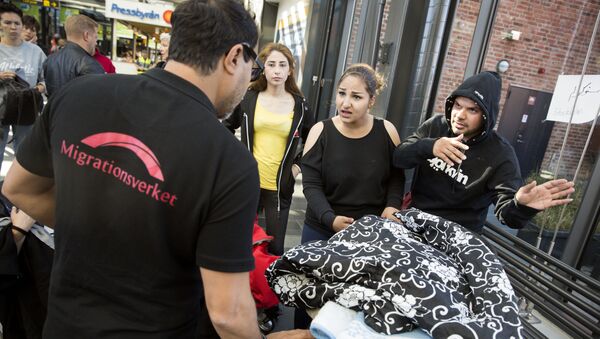 A survey by the European Commission has put Sweden in the lead EU-wise when it comes to the percentage of citizens dissatisfied with immigration politics. With three-quarters of Swedes believing that immigration has failed, it is unsurprising that this issue has become the focal point of the political debate prior to the upcoming general election.

While Sweden has been among the most generous European nations when it comes to the admission of refugees, an astonishing 73 percent of Swedes believe that their country's immigration policy has failed. This is by far the highest in the entire EU; for example, in Portugal the figure is 13 percent and in Ireland it's 18 percent.

The European Commission's findings resonate well with a recent survey carried out by pollster Ipsos on behalf of the daily newspaper Dagens Nyheter. Ipsos found that 4 in 10 Swedes wanted "drastically fewer refugees," which indicates a doubling since 2015. All in all, 60 percent of Swedes were found to be in favor of a more restrictive immigration policy. Over the same period, the proportion of those supporting a more generous immigration has halved from 26 percent to 12 percent.

Columnist Stig-Björn Ljunggren, a PhD in political science, has attributed the results to Swedes' "sensitivity."

"My hypothesis is that we in Sweden are much more sensitive to the kind of differences that have arisen now, while in many other countries it looks natural. For example, we react very strongly to beggars in Sweden. In many other countries, it has been a natural part of the cityscape for a long time," Ljunggren told the Nyheter Idag news outlet.

Stig-Björn Ljunggren also ventured that the results had to do with the loss of homogeneity.

"In Sweden, we are hypersensitive. We used to be a homogeneous country, which we are no longer. Homogeneity has been broken. Therefore, we believe it has gotten worse than it actually has," Ljunggren said.

According to Ljunggren, immigration has become a political problem, which is currently present in each party's political agenda. He also interpreted it as a token of the established parties' failure, venturing about a "broken social contract."

Of late, both Sweden's left-wing and right-wing heavyweights, the Conservatives and the Social Democrats, have called for a more restrictive immigration policy, in stark contrast to what they had been advocating in recent years.

The Social Democrats, whose popular support in Sweden's second-largest city Gothenburg has plummeted to a record low 15 percent, admitted that Sweden has taken in "too many refugees" in recent years.

Prime Minister Stefan Löfven said that Sweden will have a more restrictive asylum policy in place until the EU has introduced common immigration guidelines.

"Sweden should not take more responsibility compared with the others," Löfven told national broadcaster SVT.